Nokia is officially hosting an event on October 22, thanks to a teaser that the company posted on Twitter today. The tweet says, “At Nokia, we never stop innovating. More to share on October 22,” with “innovation reinvented” as a hashtag. Nokia also included a photo that shows skiers tearing up the slopes in a desert, to which some people are saying is Abu Dhabi, including notorious mobile insider evleaks.

Nokia isn’t giving us many clues as to what they could be announcing that day, but if we were the betting type, we would say that the company is going to unveil its heavily-rumored 6-inch Lumia 1520 handset that will complement the Lumia 1020.

The Lumia 1520 was originally rumored for a September 26 launch, but that date was then pushed back to sometime in October, and indeed, Nokia has officially announced an October event. We’re not sure what the delay was for, but if anything, Nokia might have wanted to make some last minute changes to make sure everything was right before sending out invites. 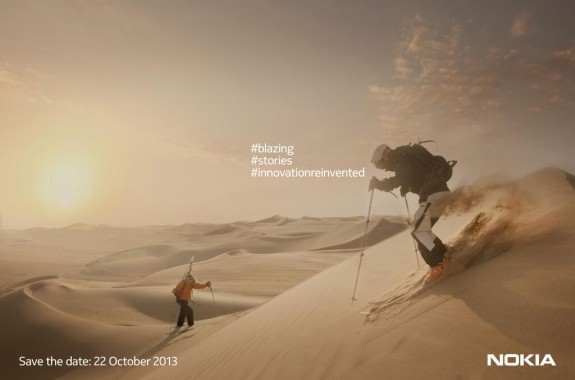 We’ve seen plenty of leaks of the Lumia 1520, including a press shot from evleaks that shows off the device’s large 1080p display, making it one of the first displays of its kind to reach a Windows Phone 8 device. We’ve even seen leaks of the device out in the wild with a neat little flip cover case that we may also see come October 22.

The Lumia 1520 has been rumored since late July, and it looks to be the successor to the Lumia 1020 which was just recently launched. It may not be a direct successor, as the two phones might just simply coexist and complement one another, but the 1520 could be the next Nokia smartphone to get if you’re not set on all of the 41-megapixel camera hype.

The 1520 will have a decent camera, though, rumored to be sporting a sensor that will be able to shoot 5-megapixel and 16-megapixel photos at the same time, which is a similar ability to that of the Lumia 1020′s camera. Other than that, the 1520 will sport a 1080p display, making it one of the first Windows Phone devices to pack a full HD display.

Nokia also seems to be working on a Windows-based tablet, although we haven’t heard much about it. It’s possible that Nokia could unveil such a thing during its October event as well, but we have a feeling that the Lumia 1520 will most likely be the star of the show.