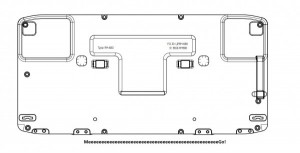 While Nokia had announced its first MeeGo smartphone in the form of the slate-styled Nokia N9, developers will be able to get another version of the MeeGo phone with a slide-out keyboard and some modified specs. Dubbed the Nokia N950, the developer edition with its sliding keyboard should resemble early leaks for Nokia’s MeeGo phones and the overall styling would be similar in some respects to the current Symbian^3-powered Nokia E7.

The Nokia N950 will be similar internally to the Nokia N9, which features an ARM-powered 1 GHz CPU, PowerVR SGX530 graphics, as well as 1 GB of RAM. The device will feature 1 4-inch FWVGA LCD display rather than the 3.9-inch Clear Black Display based on AMOLED screen technologies on the Nokia N9.

Nokia does warn developers that the software running on the Nokia N950 is in beta and that OTA updates may not be available until the next version of the software. There are a number of ‘known issues’ associated with this developer preview phone, but for those who can’t wait for the N9 to ship later this year, these may be acceptable issues:

* If the device becomes unresponsive you can to perform a hardware reset.

* Certain types of use may drain the battery faster than normal.

* Across the UI there are still logical ID’s shown in some languages,

icons may not be finalized and animations with opening windows are

* Over-the-Air updates may not be available for the next software version.

* Help (Info buttons) is disabled from this release

* There are many applications and services which are not available in

* Performance of all use cases has not been optimized yet

* Echo may be heard during some voice calls. This can be eliminated

by turning speakerphone on and off during the call.

* Chinese input method is not supported in this Beta release

* The device may not always see all available WLAN’s (refresh)

* WLAN data transfer may stall off and on with WPA2/AES encryption.

* Bluetooth may not work when Device is connected to WAPI AP.

* The browser is unstable, has known rendering issues with sites.

The look and feel of the browser is not finalized yet.

and may long before content shows up in e.g. music player or video

* USB needs to be in SDK (from Settings->Accessories->USB) before

SDK mode when connecting with USB)