Instead of releasing legit demonstrations of the PureView camera that’s a centerpiece of the new Nokia Lumia 920, the company used what appears to be professional video equipment to produce misleading demonstration videos. Nokia has the most advanced camera phone technology on the market, but apparently that’s not good enough.

The Nokia Lumia 920 is the first Windows Phone to feature a PureView camera, which is simply miles ahead of anything we’ve seen from Apple or any Android manufacturer. We’re in the midst of evaluating the Nokia 808 PureView camera phone, which produces stunning photos and were excited to see the technology move beyond the Symbian platform and on to a bigger stage.

Unfortunately, that move has been marred by the above demo video. In the video we see a happy couple out for a bike ride. The man is shooting video with a Nokia Lumia 920 as his girlfriend giggles and they ride along the waterfront. The video shows splits of what the scene supposedly looks like with and without the Nokia Lumia 920’s optical image stabilization (OIS) turned on and off. The results appear to be pretty stunning as the video is silky smooth despite the fact that the man is shooting from a moving bicycle with one arm outstretched. 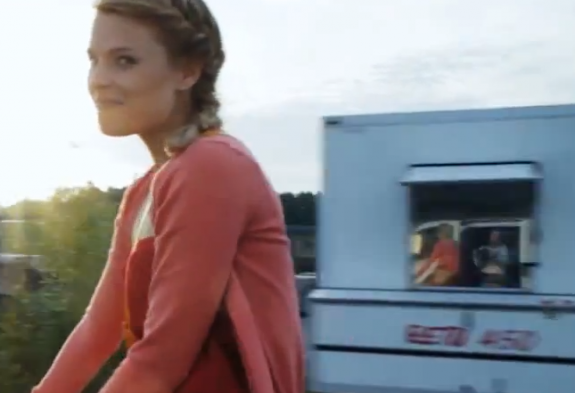 Still from the Lumia 920 video.Note the reflection in the window.

As the clip progresses, there’s a glimpse of the camera that’s actually shooting the scene in the reflection of a trailer. It appears to be a professional camera crew using a camera much larger than the Lumia 920 mounted inside a white van. Not only is the video not shot with a Lumia 920, it’s not shot from a bicycle at all. This is quite misleading. Nokia confirmed to The Verge that the Lumia 920 demo video was not shot with the new Windows Phone.

We understand that Nokia and other mobile phone manufacturers want to impress users, but there’s a pretty clear-cut line between showing off what you’ve got and misleading consumers. It’s a shame that PureView is receiving this kind of treatment rather than showcasing its true capabilities. From here on out, reviewers are going to question the validity of any PureView photo and video samples.

This is the last thing the struggling phone maker and the Windows Phone platform needs. Samsung’s created a buzz with its Galaxy Note 2. Motorola just introduced a new line of flagship Android devices and Apple is set to introduce the iPhone 5 next week.  And now Nokia’s got that phone with the fake video promo…

Nokia’s apologized for the Lumia 920 video in question and posted an actual video demonstration of the phone’s optical image stabilization feature, which you can watch below.

In a blog post titled An Apology is Due, a Nokia representative wrote:

We apologize for the confusion we created…We are looking forward to bringing the Lumia 920, with PureView optical image stabilization to select markets later this year.