The Nokia Lumia 920 looks like an improvement over its predecessor in almost every way except one: there’s no option for a cyan color. Thankfully Nokia is teasing the color for the new Lumia device.

The Verge spotted a cyan Lumia 920 in a Nokia video for the upcoming Red Bull World app. As the video discusses features of the app, it shows all the announced colors of the Lumia 920 including the bright yellow and red colors. For a split-second, however, the yellow Lumia 920 flashes another color.

At the 38 second mark in the video below the Nokia Lumia 920 flashes cyan like the Lumia 900. It’s hard to get the timing exact, so there’s a screenshot below if you can’t pause in time.

The app in the video gives users info on the latest news in the Red Bull media empire. It gives updates on Red Bull athletes and sports events that are coming up. The energy drink’s range of media is impressive, and the app should give Lumia users access to most of it.

The Nokia Lumia 920 features a PureView camera, wireless charging, a display that’s usable with gloves on, NFC, and Windows Phone 8. The phone could launch on AT&T and Verizon in the U.S. We hope the cyan color will come to at least one of those carriers. 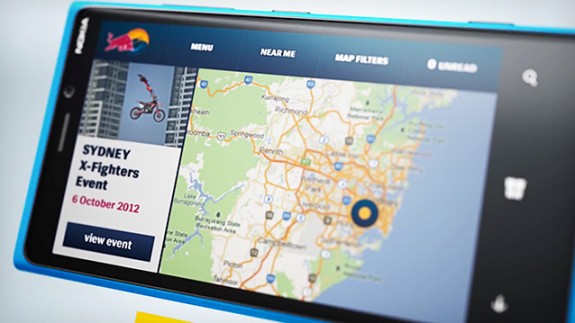