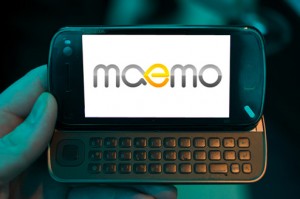 It looks like the tablet designs that Nokia had patented back in 2010 could be for a Maemo 6 device that straddles the space between smartphone–like the Nokia N8–and tablet. It’s unclear how Maemo 6 will shape up to be or what form factor the OS will appear on, but it’s interesting to hear Nokia talk about the platform.

When Nokia had adopted MeeGo, it had announced that it would scrap the Maemo platform as Intel would scrap its own Moblin OS in favor of co-developing MeeGo. Turns out, Nokia hasn’t quite scrapped Maemo just yet and this may be a transitional OS before releasing a MeeGo device.

In the past, Maemo devices have taken on a variety of form factor, including a small slate form and a more compact smartphone-like form factor with a sliding keyboard in landscape mode more recently.

Maemo 6 will be compatible with MeeGo 1.2, according to a session track information for an upcoming MeeGo conference to take place in San Francisco, California. Currently, Maemo 6, which will succeed Maemo 5 on the Nokia N900 smartphone, is codenamed Harmattan:

Nokia is working on the release of a product this year, expected to raise the interest of the MeeGo community. It comes with an OS codenamed Harmattan that is API compatible with MeeGo 1.2. Let’s have a look at the peculiarities of Harmattan, and how to overcome them for the benefit of the MeeGo community. There have been discussions on whether community apps packaged for Harmattan should be available at the meego.com Apps catalog, or whether Harmattan should have an own product in bugs.meego.com as a 3rd party open source project. This session is a good chance to explain the discussions and conclusions (if any at that point) around these topics.

Prior to its anticipated adoption of MeeGo–which is now being overshadowed by Nokia’s latest partnership with Microsoft to adopt Windows Phone 7, Maemo was expected to be the company’s platform of choice for high-end devices. Like Android, Maemo is based on Linux and offers more robustness, yet the Maemo 5 release on the Nokia N900 didn’t offer enough for consumers for that device and platform to take off. In short, the N900 is a hacker’s dream come true as it is built on a completely open platform–even more open than Android’s claims of openness–but didn’t appeal to consumers as it lacked apps and the polish of a consumer-centric smartphone OS.