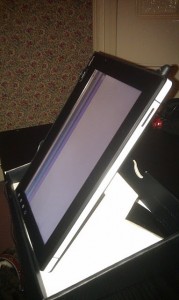 Well, it’s been a long, long wait, but the first Adam tablets from Notion Ink are finally reaching users and the first unboxings in the wild are up at NotionInkFan.com.

Not a whole lot to see, other than what appears to be the entirety of the instruction manual, but it’s exciting to see this device has made it to end users. While the Adam was previously unboxed by Rohan of Notion Ink (though strangely it never really left the box), it’s not the same as an authentic buyer unboxing.

No reviews yet, but the guys at NotionInkFan.com will surely post those as they roll in. I’m most looking forward to seeing how that wedge shape works for people. Also of interest is the on-screen keyboard. Notion Ink has been pretty consistent in showing the Adam working with external keyboards (including in their unboxing). Makes me wonder if there’s an unspoken reason for that.