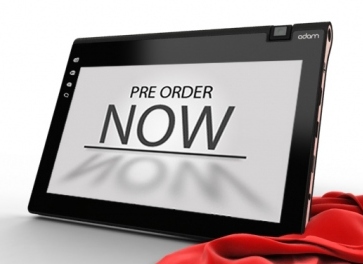 The folks at Notion Ink have finally announced pre-ordering for their Adam tablet with your choice of standard LCD or sunlight-viewable Pixel Qi display. Friends of Notion Ink, i.e., those who had commented on their blog before the previous tease, will be offered a 6-hour windows to get first crack.

That window opens in about 2.5 hours (December 10th, 00:00 Indian Standard Time). After that, everyone else can queue up to order theirs.

There are six variants mixing and matching between LCD or Pixel Qi, Wi-Fi or Wi-Fi + 3G, and 850 series or 900 series. I’ve been up and down their blog and across the web looking for the difference between 850 and 900 without luck. (Update: Chuong points out that likely refers to the MHz of the 3G radio.)

In addition to the specs already posted on their site, they are teasing a new “mystery” feature. It is not NFC (Near Field Communication) nor an active digitizer. Whatever it is, the Adam is already the most feature-packed of the new generation of mobile tablets, and it’s sporting one of the best custom interfaces I’ve seen, so that mystery is just a cherry on top of the sundae.

Nice to finally have some solid news on the Adam. Of course, real world reporting on the device is yet to come, as is an announcement on when the product would actually ship. I also find it odd that they removed the drop cloth only to reveal another mock-up. I can only hope it lives up to the hype. Anyone ready to take the plunge and see if it does?