Android users don’t need to upgrade to the Samsung Galaxy S III to unlock their phones by voice, they just need to look for Nuance’s Dragon ID on their next phone.

According to TechCrunch, Dragon ID lets users unlock their Android smartphone or tablet with their voice. Similar to the Galaxy S III users just need to say “hello dragon” to unlock the Android device. The app also acts as a personal assistant like Siri that can access the user’s messages and calendars as well as launch applications.

The demo video shows the app telling the user whether or not she’ll be late for a meeting and showing how many tweets and emails she hasn’t read yet. Later it shows the app making a mobile payment for lunch, though it’s not clear how it works or if the feature is in the current version. 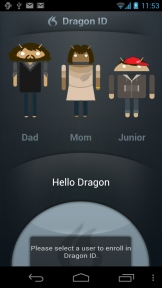 Later the video shows the app recognizing two different voices, and remembering which app the second user was playing last time they used it. Without proper dual-account functionality in Android devices it’d be hard for the app to get email for two different users, however. Recognizing different voices is nice for launching apps, though.

Nuance wants to bring Dragon ID to other platforms, though it probably won’t land on iOS or Windows Phone anytime soon.

No word on which manufacturers Nuance will partner with to roll out Dragon ID.