NVIDIA is looking to double the number of smartphone models running on its Tegra ARM-based chipset from 15 models launched in 2011 with Tegra 2 to 30 models launching this year with the quad-core Tegra 3 CPU. At its investor meeting, the company says that the phones will also be less expensive at launch than last year with thirteen models having a transfer price of under $300. Additionally, the company is working quickly to gain LTE support on its quad-core Tegra 3 CPU, which so far has been shunned by U.S. carriers who are looking to Qualcomm’s rival Snapdragon S4 for LTE capabilities. 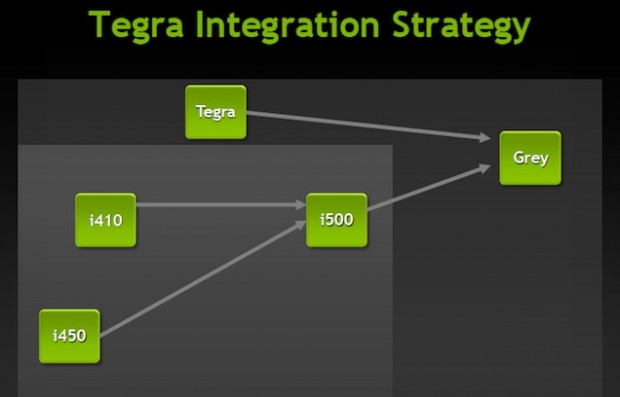 NVIDIA had announced that it recently gained AT&T approval for its Icera 410 modem, which will be compatible with the Rethink Possible LTE network. Additionally, the next-generation Tegra 3 processor will come with an Icera 500 modem, which the company vaguely described as having speeds beyond what we’ve seen today according to a report on The Verge.

Still yet, a combined applications processor with GeForce graphics and LTE modem, known as an SoC, won’t be happening until 2012. NVIDIA’s codename for that version of Tegra 3 is Grey.

The Tegra 3 processor with the Icera 410 LTE network support will be coming later this year. Hopefully, that will mean that in addition to dual-core Snapdragon S4 phones, AT&T will also be carrying phones running on NVIDIA’s Tegra 3 platform. Most notably, the HTC One X was recently launched on AT&T with the Snapdragon S4 whereas HTC’s international version without LTE capabilities carried Tegra 3.

NVIDIA will likely also need to work with Verizon Wireless and Sprint to get its chips compatible with those networks as well.