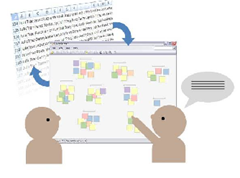 I love the work that is coming out of Office Labs Ã¢â‚¬” fun little prototypes that help push edge of what we might see in future Microsoft Office endeavors or potential applications themselves. Best of all, the prototypes are free to try out.

Checkout the latest release called StickySorter, a new twist on collecting notes during a brain storming session. My only question Ã¢â‚¬” where’s the ink support guys? Why isn’t ink a given prerequisite at Microsoft, especially for a prototype like this? I’m just asking .

StickySorter is an Office Labs sponsored spare-time project by two Microsoft employees, Julie and Sumit. The idea sprung from the need for project teams all over the world to gather and organize data using a collaborative process known as affinity diagramming.  Since its inception, StickySorter has evolved into a desktop application so anyone can use it to collaborate and organize ideas electronically, using a familiar sticky note interface.

via One Microsoft Way