Images for Verizon’s successor to the original LG Revolution, which was the third 4G LTE smartphone to launch on the carrier’s fast mobile broadband network, have surfaced. The device is said to be both slimmer and sleeker than the original Revolution, which had a more brick-like appearance. Coupled with a 720p HD display and 4G LTE radio, this device could very well be Verizon’s answer to the LG Nitro HD on AT&T’s 4G LTE/HSPA+ network. 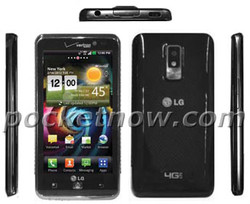 In the past, the LG Revolution 2 had also gone by its codename of the LG Spectrum.

The device is also anticipated to have a dual-core 1.5 GHz CPU, 8-megapixel rear camera with 1080p HD video recording, and LG’s UI on top of Android.

No additional details are available at this time.

Via: Phone Arena via pocketnow