We’ve heard about the Pantech Breakout before as yet another addition to Verizon Wireless’s 4G LTE portfolio of Android smartphone, and now we’re beginning to see some official press photos for the device. The folks over at pocketnow had uncovered some official photos for the 4G LTE smartphone–a first for Pantech–that will join the company of the HTC Thunderbolt, Samsung Droid Charge, LG Revolution, and soon to come Motorola Droid Bionic and Samsung Stratosphere. 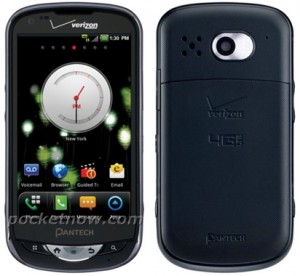 The Breakout will feature the smallest touchscreen of the lot, featuring a 4-inch WVGA display rather than the typical 4.3-inch touchscreen of its peers on Verizon’s network. Additionally, with a single-core gigahertz processor and 512 MB RAM, the Pantech Breakout will perhaps be more competitive with Verizon’s first generation line of 4G LTE devices–such as the Thunderbolt, Charge, and Revolution–rather than the second-generation 4G LTE devices that will be ushered in by the Motorola Droid Bionic with a higher resolution qHD display and dual-core processor.

The Breakout will come with the Pantech UI on top of Android Gingerbread.

The smartphone also comes with a rear-facing 5-megapixel camera as well as front-facing VGA camera and should be more affordable than the Droid Bionic flagship. The device, like the Droid Charge, will have physical Android navigation buttons as seen on the press images, rather than the capacitive touchscreen buttons just below the display. The buttons themselves remind of the layout of the LG Optimus One series.