Though AT&T’s 4G LTE version of the Ice Cream Sandwich-powered HTC One X is not slated to go on sale until May 6, it looks like one AT&T retail store has let a unit of the coveted smartphone slip to one lucky customer. According to Engadget, one lucky AT&T customer was able to walk out of a local retail store with the phone for $199 with a two-year contract. It’s unclear if other stores will be willing to sell the phone early at this time, but you can check your local AT&T store if you’re interested in the HTC One X. 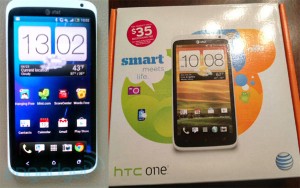 Unlike the international version of the quad-core Tegra 3-powered HTC One X, the AT&T variant will launch with a dual-core Qualcomm Snapdragon S4 processor and 4G LTE connectivity out of the box. According to AT&T, 4G LTE delivers mobile broadband speeds up to ten times faster than 3G, and the S4 processor is more compatible with its network as Tegra 3 does not come with native support for LTE at this time.

Another HTC One X variant that’s known to be arriving in the U.S. is the Sprint HTC EVO 4G LTE, which resembles more of the original HTC EVO 4G (WiMax model) than the HTC One X with a boxier shell, a kickstand, and red accents. That model, which will be compatible with Sprint’s 4G LTE network, will also use a Snapdragon S4 processor.

When the HTC One X goes on sale on May 6, it may become overshadowed by Samsung’s announcement of its Galaxy S III flagship on May 3. Though the Galaxy S III will be announced at the time, users hoping to snatch the Galaxy S III and its rumored quad-core Exynos processor will probably have to wait a bit before the device will be available. Thus far, it’s unclear which of the big four national U.S. carriers will be carrying the Galaxy S III.