Move over Motorola with the Maxx series (Droid RAZR Maxx, Droid RAZR HD Maxx) smartphones as Onyx International’s new EINK Android smartphone with an e-ink display will last on a single charge for up to a week. The company’s phone uses screen technology that’s more typically found on e-book readers, such as the Amazon Kindle Paperwhite or the non-tablet edition of Barnes & Noble’s e-reader.

The device was featured on site ARM Devices. 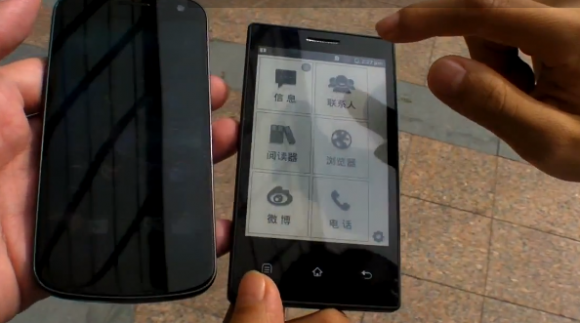 Phone on left is turned on at full brightness under direct sunlight; EINK display is still visible.

The display, while being extremely battery efficient and boasts being viewable outdoors and wide viewing angles, will only give users a greyscale display at this time. That’s right, the EINK smartphone has a monochrome display that won’t show colors and probably won’t be as smooth for viewing videos as e-ink screens typically have a slower refresh rate than rival LCD or OLED display technologies.

The phone itself is described to be ‘super light’ by Slash Gear, which says that the device weighs in at just under 100 grams.

Other features include a more modest ARM Cortex A5 processor and a SIM card slot. The Android edition that’s powering the EINK is said to be optimized for e-ink screens.

For bibliophiles who enjoy reading, this could be the mini-tablet on the go that has access to 3G connectivity and will allow users to make phone calls.

With the focus on videos, pictures, and multimedia these days, it’s unclear if this device will find an audience outside the e-reader niche.