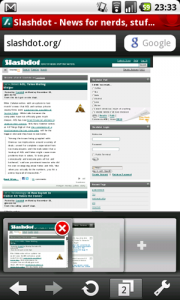 The browser doesn’t quite support full hardware acceleration yet according to an early review on Android Police. According to the Android-centric blog, because Opera doesn’t make use of the Webkit engine, some content may not display as intended on Opera Mobile. Another issue is rendering speed, which is on-par with the newly unveiled Firefox beta edition for Android, but is slower than the native Android browser.

The conclusion that Android Police came away with isn’t entirely positive, but isn’t entirely negative either. While the browser is still labeled beta, Opera still has time to work out some of the kinks and refine the performance of Opera Mobile for Android:

Opera Mobile is fairly average in its performance. Websites loaded at a speed that was neither impressive nor dismaying. Panning was smooth, but it would have to be to be at all competitive. Settings are few and far between, and the UI looks slightly dated. Not a whole lot has changed since Opera Mini. There is one piece of good news, however: the YouTube mobile site plays quite well, albeit at a seriously low resolution.