Optimus 3D to be Introduced by LG at MWC? 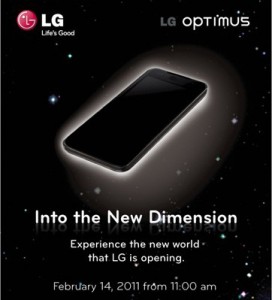 LG is speculated to be introducing a 3D version of its Optimus line of smartphones. In addition to the powerful LG Optimus 2X, which was shown at CES, the company may introduce a glasses-free 3D smartphone at February’s Mobile World Congress if details from the company’s invitation for an event at the trade show is inferred correctly.

The event invitation, slated for February 14th, reads that LG will be venturing “Into the New Dimensions.”

With the company having shown off a 4.3-inch glasses-free 3D display and saying that the technology could make it into smartphones, a 3D Optimus phone would not be unlikely. Coupled that with NVIDIA’s potential Tegra 2 3D chip leak, a 3D Optimus phone prospect is a likely candidate for MWC.

If true, an Optimus 3D smartphone would be competitive with Sharp’s Galapagos 3D offering.