A smartphone by the name of London–not the same as the leaked BlackBerry London smartphone that we’ve seen floating around–will be headed to UK wireless carrier Orange and pack in the Medfield Atom-based processor made by chip-maker Intel. The device is speculated to get an announcement at Mobile World Congress at the end of the month in Barcelona, Spain. After a customer had completed a survey, he was shown an image of a phone with the ‘Intel Inside’ logo, as posted below: 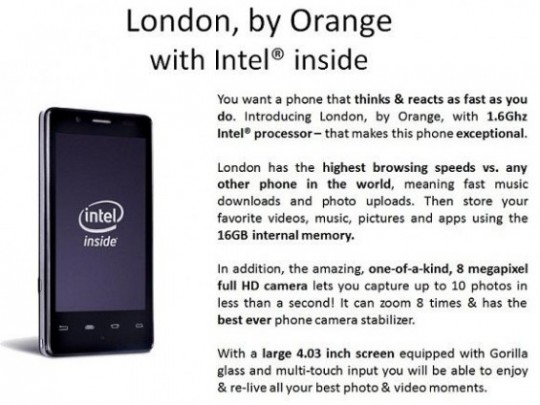 The image suggests that the London phone will boast some great specs, including an 8-megapixel camera that allows users to shoot 10-photo bursts in less than 1 second. With an image stabilizer, the camera has 8X digital zoom and can also record ‘full HD’ videos. The camera will have a 4.03-inch display. Given Intel’s work with Google lately and the four capacitive touch navigation buttons placed just below the screen, it appears this will be Android smartphone.

It’s unclear what the exact specifications of the phone will be, or if the hardware shown in the image is in its final stages. The hardware closely resembles the prototypes that Intel was showing off at its booth just last month in Las Vegas, NV at the Consumer Electronics Show.

Earlier in the year, preliminary specs for Medfield suggests strong performance, though battery issues remain a concern for the more power-hungry Atom-based architecture. A single-core Medfield chipset was said to offer comparable performance to ARM’s dual-core models at the time. Intel had promised a big presence for Medfield in tablets and smartphones starting in 2012.

Intel’s Medfield launch this year will be pitted against next-generation ARM chipsets, which are coming out with quad-core applications processors. NVIDIA is expected to host a big event to debut some quad-core ARM-based smartphones with the company’s multi-core GeForce graphics engine. Those phones will be powered by the Tegra 3 CPU, which is currently found on some tablets such as the Asus Transformer Prime.

Motorola is another big smartphone-maker that’s also signed on with Intel to release multiple Medfield-based smartphones this year. A recent leaked image of the Motorola Medfield phone was recently posted on the Internet as well. LG, which had been an early Intel partner after having shown off an Atom-based Moblin OS-powered Intel smartphone several years ago, is still undecided if it wants to join the Medfield game.