We’re just a few hours away from Apple’s WWDC keynote where the company is expected to unveil iOS 8 and OS X 10.10, but if you just can’t wait to get a glimpse at the new OS X makeover, you’re in luck because a Reddit user has posted some photos that reveal OS X 10.10’s new look.

The images appeared on Reddit’s /r/Mac subreddit and are a bit blurry with some information blacked out, but they’re enough to know that OS X will be receiving the iOS 7-like redesign that it deserves.

The photos reveal quite a few changes with the user interface, which has been rumored for OS X 10.10 for quite some time, so we’re not incredibly surprised.

Some of the new features that we see in the photos are Control Center (very similar to iOS), improvements to Notification Center with a more iOS-like look and feel, an iOS-ified version of Safari with large buttons for bookmarks and frequently visited sites, and finally there’s the dock, which is also getting an iOS look to it, replacing the shelf from past OS X versions with an iOS-esque transparent bar. 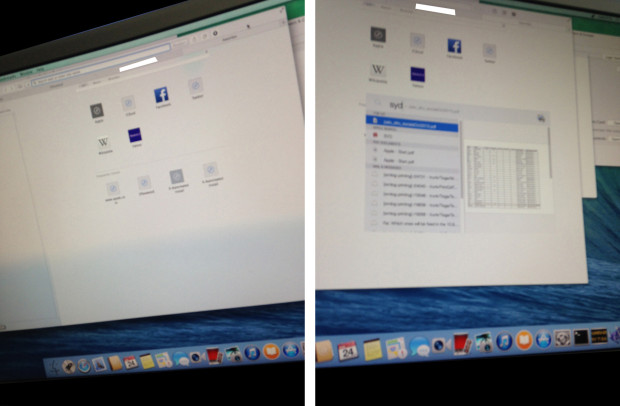 The photos first appeared on Reddit (and have since been removed) and the author has since deleted his throwaway account, but the subreddit Mods and the folks at MacRumors have verified that these photos are real.

The photos were apparently taken on March 24, which was well over two months, so it’s extremely likely that Apple changed a few things since that time, but the images at least show us what we can expect out of OS X 10.10 in general.

It was merely all but confirmed that Apple would reveal iOS 8 and OS X 10.10 at WWDC today, but once Apple had banners hung up in the Moscone Center, that was all the confirmation we needed. The name of OS X 10.10 is still yet to be confirmed, but many sources are sticking with “Yosemite” as the official name of OS X 10.10, continuing the naming convention past wild cats and onto bigger and better things. 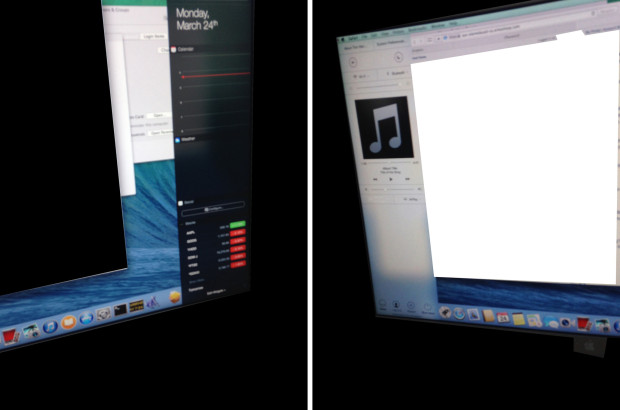 This means that we most likely won’t see new versions of OS X and iOS until late this year at the earliest. Apple has recently gotten into the habit of updating its software every year, so we’re definitely expecting to see iOS 8 and OS X 10.10 pop up before 2014 comes to a close, considering that iOS 7 and OS X 10.9 Mavericks were just released at the tail end of last year.

WWDC will run from June 2 through June 6 at Moscone West in San Francisco, and it’s limited to just 1,000 developers. For those who cannot attend WWDC, the keynote and various sessions will be streamed live and available for viewing on Apple’s website afterward, so you won’t miss out on anything important if you can’t be there. Here’s how to watch the keynote live.

As for what else we could see at WWDC, it’s unclear, but Apple definitely has a surprise under wraps, as there are still more banners in the convention center lobby that have yet to be uncovered. Could we see a new Apple TV? It’s certainly possible, given that it’s been rumored for quite some time, but we’ll have to wait and see what the company has in store for us come later today at 1 PM ET.