The Galaxy S III is one hot device right now with American carriers reporting launch delays due to overwhelming demand and short supply, but another area where Samsung’s third-generation flagship Android smartphone is hot may be internally. One user of the international GSM unit noticed some white flames and smoke coming out from his device, causing a small explosion. 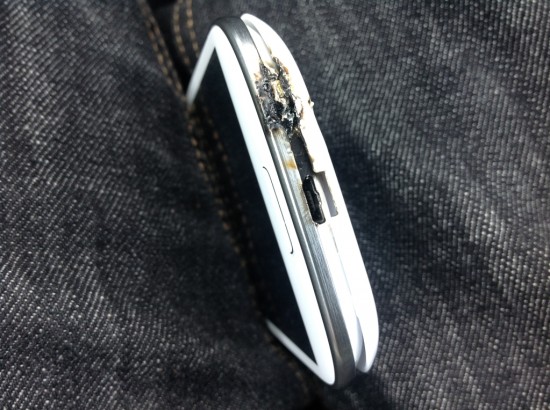 It appears that the fire/explosion occurred at the lower portion of the phone where the micro USB port is situated.

Heat may be an issue with the Galaxy S III smartphone. On the white 16 GB model with 4G LTE for AT&T’s network in the U.S., the lower third of the device does run warmer than normal when I’m actively using 4G to stream videos, browse the web, or running some processor-intensive app or games. That said, the heat issue is not nearly as bad as on Motorola’s Droid RAZR or Droid RAZR Maxx unit, where the phone would be extremely hot to the touch at times; I suspect the fault on Motorola’s smartphone may be due to some issue with Exchange ActiveSync implementations.

As Samsung is speeding up production to meet worldwide demands of its hotly anticipated Galaxy S III smartphone, it’s probably best to monitor the device’s performance and any heat issues within the first couple days of receiving the phone to ensure that your unit functions at acceptable temperatures.