In addition to the previously leaked 7-inch super slim Motorola Android tablet that was previously leaked, it looks like Motorola is prepping for two more tablets with 8-inch and 10-inch screen sizes, more angular edges, and a design aesthetic that pays homage to the company’s RAZR phones of yesteryear. Whether these new tablets will bear the Xoom branding is unknown–Motorola and Google had debuted the new Honeycomb Android 3.0 OS at CES earlier this year on the flagship Motorola Xoom tablet. 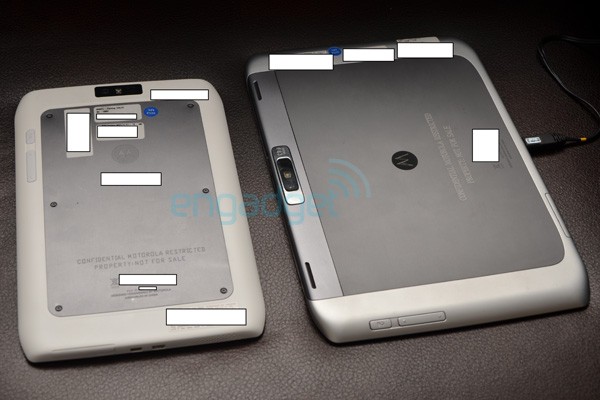 The new tablets shown here are said to be thinner and slimmer, with 9.3 mm of thickness, which is slightly thicker than the iPhone 4. The smaller tablet is aimed at multimedia capabilities and portability and will be a bit smaller than the Galaxy Tab 8.9 with an 8.2-inch display rather than the 8.9 inches on the mid-sized Samsung tab. The device is codenamed Fleming and comes with an infra-red controller so you can control your home entertainment center and HDTV utilizing your tablet.

The 8.2-inch tablet may be called the Motorola Xoom Media Edition, according to The Verge, and should weigh in at under a pound with a magnesium and aluminum build. The tablet should also have a built in subwoofer. The tablet duo will have a 5-megapixel camera on the back and will come with Android 3.2 Honeycomb.

The angular corners on the smaller tablet reminds me of the Motorola Photon 4G, which has angular edges. The Photon 4G is a 4.3-inch Android smartphone for Sprint’s 4G WiMax network in the U.S. The larger tablet has similar angles and it’s design reminds me of the RAZR. It looks like Motorola be be reviving the RAZR design language as a recent leak suggests that the company is working on a smartphone that combines the Droid name along with the RAZR design.

It appears that the smaller tablet may be a weather-resistant slate given the exposed screws on the rear to show industrial strength. Also, it looks like Motorola is going back to the micro USB charging on these devices from the pictures we’re seeing.

Engadget confirms that both devices will be 4G LTE slates. Hopefully, Motorola will have resolved the 4G issues and won’t botch these tablets’ launch like it did with the Xoom, which has still not received its 4G LTE radio upgrade yet.

4G LTE suggests that these tablets may find homes on either AT&T or Verizon when they launch in the U.S.