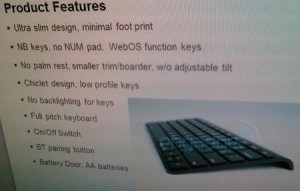 Palm’s upcoming webOS tablet, long rumored as the PalmPad, may be the codenamed Topaz according to Engadget. Along with the codename rumor, it seems that an image has surfaced for an ultra-slim Bluetooth keyboard without a number pad. The ‘Topaz’ tablet is said to be button-less and the Bluetooth keyboard from HP-Palm would come with function keys for webOS functions.