Pandora and Google have announced that the music streaming service is arriving on Chromecast today. The search giant announced during the Chromecast’s launch back in July that Pandora would be arriving on the HDMI dongle at some point in the future, and finally we’re getting that promise.

The update works on both Android devices and the iPhone, and all you have to do is update the Pandora app through either Google Play or the iTunes App Store. We’re not seeing the updates just yet in iTunes, so you’ll have to be a bit patient for Chromecast support to makes it way through the interwebs throughout the day.

All of the basic functionality of Pandora is available in Chromecast, including Play, Pause, Thumb and Skip. And because of Chromecasts awesome independent streaming feature, once you send a Pandora station to the Chromecast, you don’t need to keep the app open on your mobile device, allowing you to save some battery for other tasks. 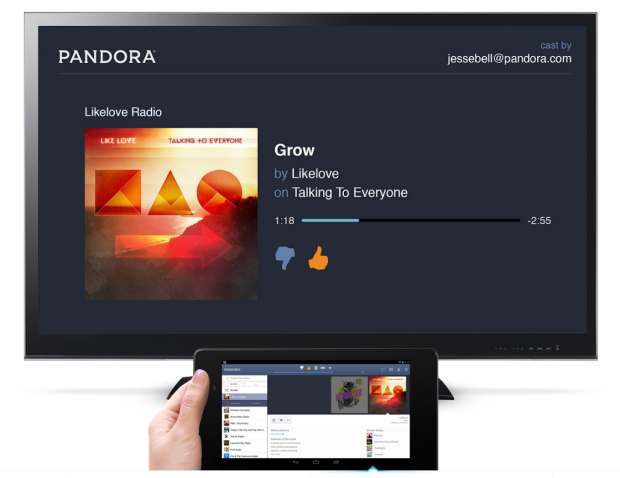 Of course, you’ll want to make sure you have a nice sound system set up before you stream music through your television. TVs are notorious for having really bad built-in speakers, so we wouldn’t suggest using your Chromecast Pandora support for that, but if you have good speakers hooked up, the TV is the perfect place to play your Pandora music, especially during parties. The TV makes for a nice display of who the artist is and the title of the song.

While Pandora for Chromecast is only available on the iPhone as far as iOS goes, Pandora says that iPad support is “coming soon,” but that could mean a million things, since Google said back in July that Pandora support for the Chromecast would also be coming “soon.” Indeed, “soon” can mean a lot of things.

The Chromecast was a huge hit when Google unveiled it over the summer, mostly because of its insanely-cheap $35 price tag that pretty much makes it an impulse purchase for anyone. The device allows you to beam streaming content to your television using your mobile device, and rather than mirroring the displays, the Chromecast actually does all the heavy lifting, so once you beam a video from your device, it’s no longer needed for the streaming to continue on the Chromecast.