Today Pandora is finally available for all Windows Phone users, about five months after Microsoft announced it would come to the platform.

The new Pandora for Windows Phone brings the popular streaming service to Microsoft’s mobile platform, complete with a Metro redesign that makes it look at home among Microsoft’s apps. The app gives users access to a large catalog of music to listen to for free, and for the rest of 2013 Pandora won’t play a single ad on Windows Phone.

Thanks to the unique features of Windows Phone 8 the Pandora app has a few features that aren’t present on other devices. Windows Phone users can pin their favorite stations to their Start Screen for instant access to music, for example. Station Live Tiles will display the name of the station, and will also show what’s playing while users listen to music. 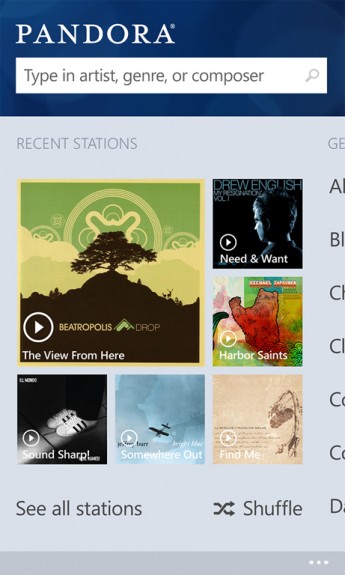 Pandora for Windows Phone also has a special feature for Kid’s Corner, Windows Phone 8’s feature that lets parents control what apps their kids have access to.

When launched in Kid’s Corner Pandora for Windows Phone will automatically filter out any music labelled as explicit. That way parents can let their kids listen to music without fear that they’ll hear new four letter words.