Apple made waves at last year’s Worldwide Developer Conference when they announced iTunes Radio as part of iOS 7. This year, the company acquired music streaming service and headphone manufacturer Beats Audio. It’s likely that they’ll integrate that technology into their current products, including iTunes Radio. In the Internet radio business, Pandora is the largest player. I had an opportunity to sit down with Tim Westergren, Founder of Pandora and Al Amici, Head of Uconnect Systems and Services at Chrysler, to discuss the future of Pandora, credible threats from Apple and the future of listening in the car. 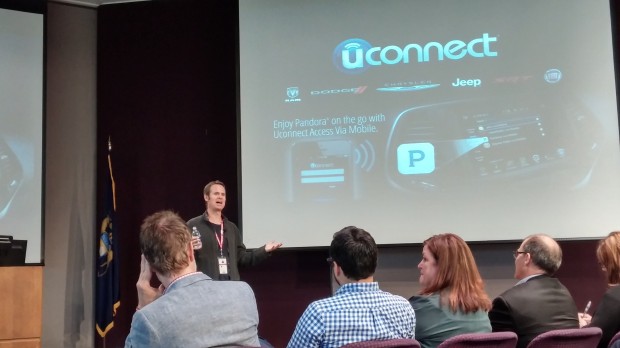 Many services promote content that is popular right now. Similar to how Amazon does their “People who bought this also purchased…” section on their website. This creates a collection of artists or songs that receive a lot of play, but does not promote new music or music from smaller bands.

Pandora uses their Thumbs Up and Thumbs Down feature to customize the channel for the listener, but not to determine what’s popular. Some artists do receive more play than others, but that’s because more listeners have created channels dedicated to that artist. Pandora’s design means that I have just as big of a chance to have my song heard as Drake does.

Pandora typically plays through every song in their database at least once a month. Not only does this help artists get paid, but it also helps get them known. Pandora accepts unsolicited tracks to their database. The only requirement is that the song or album have a UPC code and that the music is good. They have an editorial staff that approves music. Over 40% of music sent to Pandora ends up on the service.

Traditional radio sources are where Pandora competes. Based on Pandora’s own research, most radio stations in the country play approximately 300 different songs a month. That limits music discoverability and puts the fate of new artists solely in the stations’ hands.

Pandora has the ability to bring any artist into stardom. They have 77 million unique listeners a month and could easily promote a song or artist on every listener’s stream. The culture of Pandora isn’t that way. They want to make a level playing field of all artists, and help listeners discover new music that matches their own tastes, even if that’s not popular right now.

Mr. Westergren really doesn’t understand that Apple acquisition of Beats Audio. Many in the tech industry share that sentiment. But Westergren and Pandora do view iTunes Music as a credible threat.

iTunes Music competes directly with their Internet radio product, and they immediately have a huge install base. During the first month of the service being available, Pandora noticed a decline in their listeners. However, shortly afterwards those listeners came back. He believes that many people tried the service but didn’t care for the accuracy of their music recommendation engine.

Pandora has been collecting music data and customer preferences for over nine years. They have been cataloging and analyzing every song in a way nobody does. Even if Apple were to start today, they’d still be almost a decade behind in mapping the music genome.

Apple’s purchase of Beats will allow the company access to the listening data of the Beats music streaming service, and they could incorporate the into the iOS 8 version of iTunes Music. If anyone can make a company obsolete by showing up late to the party and making a better product, it’s Apple.

Other companies have tried to leverage their traditional radio audience to promote their Internet radio apps. Clear Channel’s iHeartRadio is a prime example. Listen to any Clear Channel station and they’re constantly promoting customized music with their app. Despite solid attempts from iHeartRadio and the SiriusXM mobile app, Pandora hasn’t seen a drop in traffic as a result.

Pandora in the Car

Even today, 50% of all music consumption happens in the car. In that environment, traditional and satellite radio has an advantage because those services are the easiest to access and are often front-and-center on the infotainment display.

Chrysler announced at CES this past January that they would be supporting Pandora and other services with their Via Mobile service. Via Mobile allows drivers to connect with Bluetooth to their mobile phones and stream Pandora in the car. Using steering wheel controls or voice controls, drivers can control their Pandora station and thumbs up or down a song.

Via Mobile is one of the few technologies in the car that doesn’t require plugging in the phone to work. Ford’s AppLink needs both a USB connection and a Bluetooth connection. Ford doesn’t even support their AppLink system on their popular MyFord Touch upgrade. Toyota’s Entune also requires a USB connection. Via Mobile only requires the Bluetooth, meaning the listener can keep their phone in their pocket.

Pandora still hasn’t reached perfect parity with AM and FM in the car. The driver needs to use either voice commands or access the Via Mobile menu to launch Pandora. Terrestrial and satellite radio are available on the main radio screen.

I asked when Mr. Westergren expected to see true parity in the automobile. He looked at Al Amici and said, “Yeah, Al?” One holdback, according to Amici, is that it takes several moments for streaming music to start. Starting or changing a data stream takes longer than tuning in a FM radio broadcast.

Both executives seem pleased with their progress they’re making with Pandora’s integration with Uconnect. Westergren still believes integration is in its infancy and that more companies will be on board with even better solutions in the near future.

What’s Next for Pandora?

Mr. Westergren talked about how they are thinking about ways to form communities around their subscribers and the artists. I am assured that it would not be like Apple’s failed iTunes Ping social network. Many artists on Pandora, including some bigger names, have more custom radio stations devoted to them by subscribers than they do Twitter followers.

Imagine a band being able to say that they are playing a gig in Cleveland that night. They could use Pandora to announce that gig to their fans, or to people who Pandora would think would like their music in the area. Westergren even envisions a day where a listener could buy the tickets right then.

Purchasing tickets or items would be difficult for Pandora. Only 20% of the subscribers are on paid subscriptions. Each time they attempted to grow their paid service, they didn’t succeed. Apple’s advantage in buying comes from having millions of credit card numbers attached to iTunes accounts.

If Pandora were to implement such a service, Westergren knows they’d have to have a compelling reason to get people to pay. They also haven’t ruled out a third party for handling those types of transactions, should it occur.

Pandora is starting to become available in more countries. According to Westergren, growth in Australia is faster than what it was in the United States. Worldwide growth is important because Westergren sees new subscribers starting to slow in the States. People are listening to Pandora more than ever, but they have seen new users start to level out.

For now, Westergren continues to hold Pandora Town Hall meetings where he meets with listeners and talks about why people love the service and what they’d like changed. He’s also working strongly with automotive OEMs to make his service easier to access while on the road. His biggest concern is maintaining his corporate culture of representing the artist and helping people find new music. That’s his ultimate goal for the service, and makes each business decision based on that goal.