The popular music streaming service Pandora is making some major improvements to its Android application as of late, and today version 5.0 just arrived with a much requested feature. After being slow to update and improve the app for years, lately they’ve been focusing heavily on the Android experience and today’s update finally delivered a tablet interface.

Yes, Pandora Radio on Android hasn’t had a tablet app all this time, and users have been enjoying an awkward and bad experience if they wanted to use the music service on their tablet and not a smartphone. Back in September a brand new UI for tablets arrived on iOS and now the company confirmed Android users can enjoy something similar. That’s if you all haven’t moved on to Rdio or Google Music All Access by now. 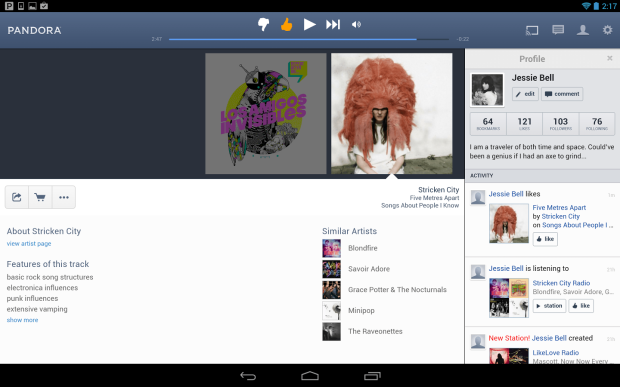 The image above is showing us a look at the brand new Pandora Radio for Android tablets, which we should have had last year, but at least it’s finally available. Taking a second look however, you’ll notice the Google Chromecast icon near the top right, hinting that its next update could enable Chromecast streaming. Essentially delivering all the power of Pandora wirelessly to any system with Google’s $35 Chromecast Dongle that was so popular this summer.

The new UI isn’t the best, but it’s a start and certainly headed in the right direction. Having the playing now information in the center of the screen, with playlist history and other details off to the sides. The right side houses all of your stations, which can quickly be accessed, making tablet users actually want to use the service. Finally. 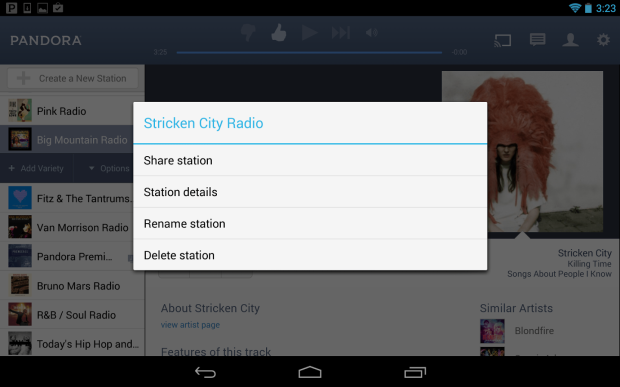 They claim to have enhanced the listening experience and added personalization to the app for tablets, improved music discovery and exploration, and added the ability to connect and share content and music with friends and family all on the new tablet-optimized Android application.

The all-new Pandora Radio version 5.0 with tablet support is available now from the Google Play Store. I’ll personally be enjoying my Google Music All Access instead.