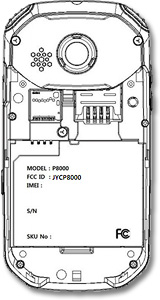 A Pantech-made phone was seen passing through the FCC, a U.S. regulatory agency for communications devices, with the model number P8000. Not a lot of information is known about the handset other than that it supports GSM/EDGE, and WCDMA on the 850/1900 MHz bands, making it a candidate for AT&T’s network when released. As Pantech doesn’t sell unlocked, non-carrier phone editions in the U.S., an AT&T release would be likely as the phone does support the carrier’s 3G frequencies.

A rendering of the handset shows that the Pantech P8000 is a candybar smartphone with a camera on the backside. Moreover, the Bluetooth Special Interest Group approved the same phone, which also indicates that the P8000 will also support a Bluetooth radio. Additionally, the moniker that was seen going through the Bluetooth SIG is “Pantech Android Smart Phone,” hinting that the phone runs on the Android operating system, something that the FCC documents did not disclose. At this time, it’s unclear what version of Android the P8000 will utilize.