We’re just going to go ahead and take a guess. Not many of you bought the HTC Jetstream, AT&T’s pricy 4G LTE tablet. Well, if you’ve been holding out for a cheaper option, you’re soon going to have your chance as the Pantech Element, a waterproof 4G LTE tablet, has leaked out in a big way today before the device’s official announcement at CES next week in Las Vegas.

Right now, the Pantech Element is pegged for a release on AT&T’s 4G LTE network on January 8th – this Sunday, and it will apparently be priced at $299 with a new two-year contract with Ma Bell.

A much better price then the one AT&T gave to the HTC Jetstream. 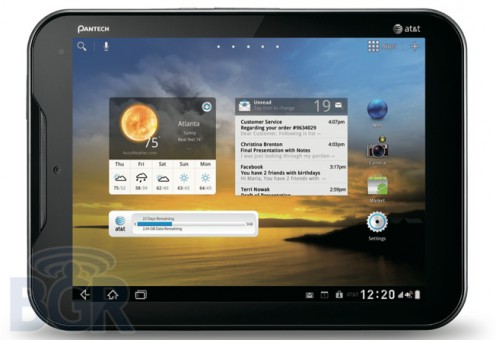 You’ll also be able to get it for $449 off-contract if signing your name on the dotted line isn’t your cup of tea.

The Pantech Element will feature a 8-inch display, Android 3.2 Honeycomb, a 1.5GHz dual-core processor, 5MP rear camera with 1080p video capture, 2MP front-facing camera, advanced “Piezo Motor” haptic feedback, and it apparently is waterproof, but not in the way you would think.

You can’t just submerge it under a bunch of water. Instead, it’s splash proof, but only if the ports on the device are closed.

All in all, not a terrible offering, especially if you’re in the market for a cheap Android tablet, but we’ll wait to make a final decision until we’re able to go hands on with it in just a few days when CES finally rolls around.