The racecar-shaped device plugs into an HDMI port, while the remote doubles as both a show selector and game controller.

Read: These Are The Best Math Apps 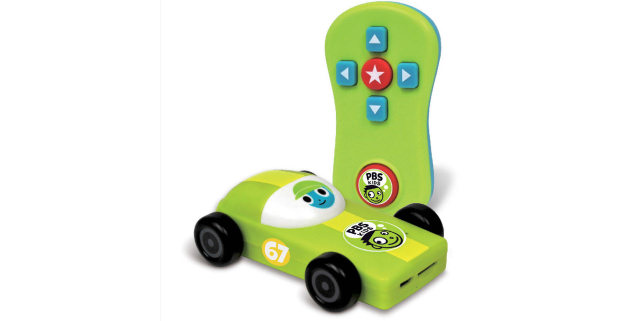 While there’s no shortage of connected devices in many households, sometimes less is indeed more. Many devices and services, such as the Apple TV and Roku, have plenty of educational content, but it’s too easy for kids to find their way to objectionable content. With the PBS KIDS Plug & Play, parents don’t have to worry about their kids stumbling into the latest The Walking Dead episode while their parents fetch them a snack from the kitchen.

One thing that’s nice about the device is that PBS includes all of the pre-loaded and updated content free of charge. Besides the free shows, the device comes with several singalongs and original games.

The PBS KIDS Plug & Play is available now at Walmart.com and will be available at other retailers soon.  While PBS is marketing the device at $49.99, Walmart.com is currently selling it for $59.95.

While pediatricians and educators generally tell parents to keep screen-time to a minimum, many kids do spend a substantial amount of time in front of screens. If you’re a parent that allows your young children to watch shows or play games, this PBS device is probably a better bet than other devices or simply throwing an iPad their way. Many apps and games that may seem innocent at first glance are full of low-quality content and commercial content that many families would rather avoid.