The Pebble, a popular Kickstarter project that offers a wristwatch capable of connecting to smartphones for control of music, text messaging, email and more, stars in a new video showing off the user interface.

The Pebble video makes me even more impatient as I wait to get my Pebble watch. Such is the experience of a Kickstarter backer.

The video shows a preview of the designed interface. The company’s UI designer shows off the various features on a virtual interface running on an iPhone attached to the designer’s wrist. They also show off a prototype on a circuit board with the Pebble display connected and running the UI. The UI seems to run smoothly on the iPhone but the prototype with the Pebble display soldered to the circuit board looks a little sluggish, which worries me some. I’m hoping I didn’t drop over $100 on something that I won’t want to use.

In the above video the designer shows off the email reading interface, switch scrolling via the side buttons. We also see the watch face and the screen for an incoming phone call. The Pebble will let users answer or decline phone calls from the watch interface. The music control interface lets users control volume with the push of the side buttons. The top and bottom buttons control volume up/down and the center button mutes the phone.

In the email that came to backers withe the video they say:

Keep in mind this is just a preview and subject to change as we continue to develop the software. For example, the font size is customizable, eg you can select to have emails shown on screen in larger print. The next step is to implement this UI for the watch itself and test it thoroughly on a prototype Pebble. 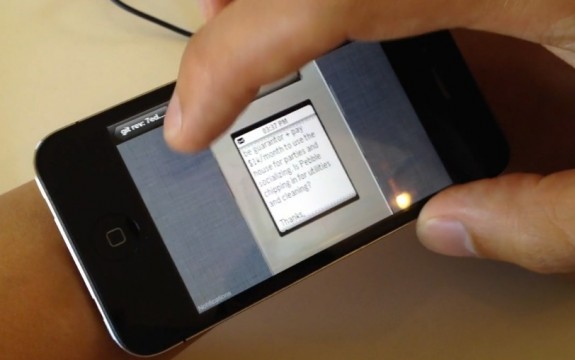 But it looks pretty finished and I’m expecting it to look a lot like what they showed us. I can’t wait for my Pebble to show up. We didn’t get a date but they’re getting closer. Some of the other issues they seek to deal with include.

For more information about Pebble see their Kickstarter page.