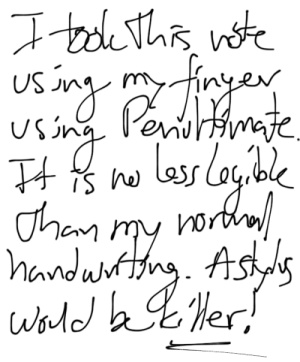 This may yet turn into a case of “be careful what you wish for” but for the time being, I am thoroughly impressed by what I’m seeing of an iPad inking app called Penultimate. Why? Because what I’m seeing are smooth, fluid lines of varying thickness, the closest I’ve seen to ink from an active digitizer.

Spotted mention of the app in a news feed this morning, but my first look into it came after receiving an email from GBM forum member TabletLawStudent. TLS pointed me to an entry on Tablet Legal, a new blog dedicated to using the iPad as a note-taking device, particularly in the legal field. The particular entry was about Penultimate and showed off these sparkling results.

Yes, it’s quite messy, but he’s using his finger so that’s to be expected. What’s amazing are the smoothness of the lines and the variation in thickness along the strokes. I had not thought this possible on a capacitive touchscreen. I tried three inking apps on Warner’s iPad and none of them delivered anything this good. Padnotes was jagged as all get out. FastFinga was better but still not great. And I’m not even bothering to blog my SketchNotes sample.

He cites a couple of drawbacks, namely the small writing area relative to a real legal pad and the lack of palm rejection. Can’t do much about the former, but I think SmudgeGuard could fix the “smudging” problem (although a more enduring fix would be to get a Tablet PC with active digitizer). No handwriting recognition either, but dumping the files into Evernote with its built-in hwr is a possible, partial solution.

Seeing smooth ink strokes, however, isn’t the same as creating them, so I investigated further and found the developer, Cocoa Box Design, also made an app for the iPhone called Handwriting that shows the same fluid lines. I downloaded it and here’s my first sample.

Yes, still messy, but better than I’ve previously done on my iPhone, and as you can clearly see in the “L”, there is a simulation of pressure sensitivity. I do not know the exact mechanism they’ve employed, but I would guess it measures speed and/or contact area. Where my Pogo stylus lingers, such as starts and turns, the line go thicker. Where I slash across the screen, the line goes thinner. It’s not nearly as precise as a pressure sensitive active digitizer, but the simulation is impressive.

TUAW has a more extensive review of the app. It seems Penultimate notebooks can only be exported as PDF, which makes it good for most purposes but bad for ink blogging. However, the Handwriting iPhone app exports as PNG, so it works fine for me (just in time for my #inktweet campaign). If Penultimate gets image export, that could be the tipping point that pushes me into buying an iPad, if only to maintain my spot at the top of the ink blog heap.