In addition to hearing that Nokia may be providing an upgrade path to its earlier Symbian^3 devices, including the venerable Nokia N8, to the next-generation of Symbian OS called Nokia Carla, we’re also seeing for the first time in photo of what Nokia is planning as a hardware successor to the camera phone king. The Nokia N8’s successor, it appears, will utilize the same polycarbonate pillow design that the Nokia Lumia 800, the Nokia Lumia 900, and the MeeGo-powered Nokia N9 have used in the past, but will come pre-loaded with some version of the Symbian OS rather than the Windows Phone 7 or MeeGo operating systems of its cousins.

Curiously, however, from the picture, a dedicated hardware shutter button does not seem visible on the phone and it’s unclear if this model will have one. Given the camera focus, it would be an odd omission. 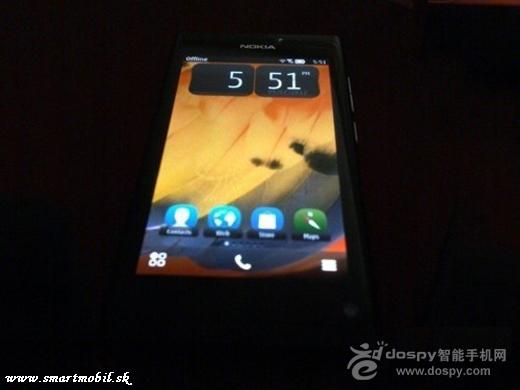 Not much information is known about the new phone, other than the fact that if it is indeed a Nokia N8 successor, it will have a very large image sensor with a camera resolution of at least 12 megapixels. Since the Nokia N8 has come out, other phone-makers are catching up to Nokia or eclipsing it in terms of sheer megapixel count, quality, or functionality. The 8-megapixel iPhone 4S is among the best camera phone on the market today, HTC has announced the HTC Titan II with a 16-megapixel sensor, and Sony has announced 13-megapixel XPERIA S and XPERIA Ion smartphones at CES last month. As the iPhone has proven that megapixel count isn’t the only thing making a good camera phone, Nokia does have huge expectations to live up to with any N8 successor given the device’s prowess when it was released.

In the last few months, we’ve heard of several model numbers for the Nokia N8 successor, including a Nokia 801 and Nokia 803 number. The picture of the phone that we’re seeing is being reported by My Nokia Blog as being a Nokia 808 model, so it’s unclear which model number will be used when the device is released.

Given the strengths of the Nokia N8 as being the large image sensor, Xenon flash for accurate color capture when using a flash, and great HD video recording capabilities, we’re really hoping that Nokia doesn’t use the same image sensor that’s being used today on the Nokia Lumia 800 and Nokia N9. Though the image sensors in the latter two phones are great, they are not as good as one could hope.

And while Symbian is a great operating system, any Nokia N8 successor would need a feature that so far has been missing: tap to focus. The feature first debuted on Apple’s iPhone and has since been replicated on Windows Phone and Android handsets, providing users with the ability to produce images with a shallow depth of field. This means that users can focus in on the subject and blur out the background to replicate the focusing capability that’s on a DSLR camera.

More recently, ahead of the Mobile World Congress trade show, Nokia has been teasing some great video samples taken from an unknown hardware. It’s unclear if the videos could originate from the Nokia N8 successor.