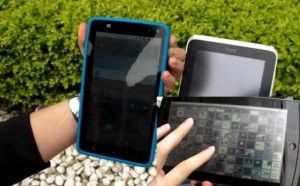 Pixel Qi, makers of a screen technology that can be considered a good mix of the best of LCD (color) and e-ink (outdoors visibility, energy saving) features, is looking to invade more tablets beyond its popular release on the Notion Ink Adam Android tablet. The company is working with ZTE to re-release the ZTE Light, a 7-inch Android tablet that was released last year, with a Pixel Qi display. In the Asian market, the display will be powering a couple of tablets from Shizu in both 10- and 7-inch form factors. Those tablets will run on Samsung’s Hummingbird processor, which clocks in at 1 GHz on a single-core architecture.

The display-maker has a panel that measures 10 inches and comes with a 1280 X 800 resolution, which would fit Honeycomb tablet displays nicely.

The company is also looking to differentiate itself with other features, taking on the eco-conscious market with a design that incorporates solar panels into the bezel surrounding the Pixel Qi display. As the panels can output 1W of power, it would be enough to power the display and provide energy to the tablet. Also, it can help users recharge their tablets during the day if they fail to bring a power cord with them.

While Pixel Qi may have been a great solution a few years ago when all it had to contend with were LCD displays, which were more power hungry, and e-ink display, which are not yet available in color in mainstream products, newer display technologies are gaining momentum that are eating away at some of the perceived benefits of the display. Super AMOLED, Super AMOLED Plus, and AMOLED displays being championed by Samsung now offer great contrast and vibrant colors, rich blacks, and better outdoors visibility than previous generations of AMOLED display technologies, while being able to reduce energy consumption. LCD and Super LCD technologies have improved to provide with a better outdoors display and reduce power usage, and new technologies such as Liquavista displays and Mirasol displays will soon be hitting the market.