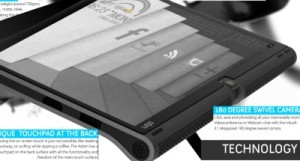 Notion Ink has released some exciting news–the company is aiming for a Holiday 2010 release of its Pixel-Qi-powered Adam tablet, which will ship with Android 2.2 Froyo. The company says that if it misses that shipping date, the Adam should be available by CES 2011, which happens in early January. Previously said to be priced between $400-$500, the Adam’s advantage over competing Android tablet is its unique Pixel-Qi screen.

Unlike traditional tablets today that ship with LCD screens, Adam’s Pixel Qi display is both colorful and readable in direct sunlight, an issue that the LCD IPS screen that the iPad ships with struggles to do. The screen effectively is a beautiful hybrid between e-ink technology, which offers readability under sunlight, and a transflective LCD screen, which renders videos and colors nicely. Reviewers who have seen the Pixel Qi screen noted that colors were pretty good dead on, but display does have limited viewing angles, unlike the IPS screen technology that the iPad employs, and colors will start looking distorted at wider angles. If you’re the only one to be looking at the Android tablet, that shouldn’t be a problem as you’ll most likely hold the Notion Ink Adam tablet in front of you, but if you’re opting to use it as a communal display to watch a video with some close friends huddled around the device, the person in the middle will probably have the best seat in the house. Additionally, the Pixel Qi display is said to be more power efficient than LCD as well.

There will be several different models of the Adam. The base model, to cost $400, will utilize a traditional LCD screen like other competing tablets. An extra $50 will give you a built-in 3G modem. A base WiFi-only Adam with a Pixel Qi screen will cost $450, and a Pixel-Qi Adam with 3G will go for $500, which isn’t bad considering that the WiFi-only iteration of Samsung’s Galaxy Tab is expected to retail for that much.

As an iPad owner, I am intrigued by the Pixel Qi display. I love the multimedia and rich, colorful screen on my iPad indoors, but the screen, unlike the iPhone’s screen, becomes completely unreadable and washed out when out under direct sunlight–it is better if you’re sitting in the shade under a tree, but don’t expect to use the iPad as an e-reader at the beach without shade. In contrast, my nook, which utilizes an e-ink display, truly shines in the sun.

According to the company’s blog post, “pre-booking”–which we assume is pre-orders–will start in December for those interested.

Another competing screen technology to Pixel Qi is being pioneered by Qualcomm called the Mirasol display. Like Pixel Qi, Mirasol hopes to also combine the color and video aspects of traditional LCD screen tech while adding outdoors, direct sunlight visibility like e-ink. I got a chance to talk to some Qualcomm representatives at CTIA and you can see the video below of the competing Mirasol screen technology.