After over two months of being available on iOS, Plants vs. Zombies 2 has now launched on Android devices. Nothing too special on Google’s platform, though; the game is pretty much identical to the iOS version, with the only big difference being that it uses Google Play Game Services to track achievements and manage the leaderboards, rather than iOS’s Game Center.

Plants vs. Zombies 2 is also a free download once again, with in-app purchases that can help you win quicker and easier. The game works on both smartphone and tablets, so you can enjoy the game either on your handset or your Nexus 7, as the game supports most screen sizes.

Plants vs. Zombies 2 initially launched back in July in Australia and New Zealand as sort of a soft launch for the game. Over a month later in August, the game launched for everyone on iOS, letting iPhone and iPad users destroy some zombies with their garden of killer flowers and plants. 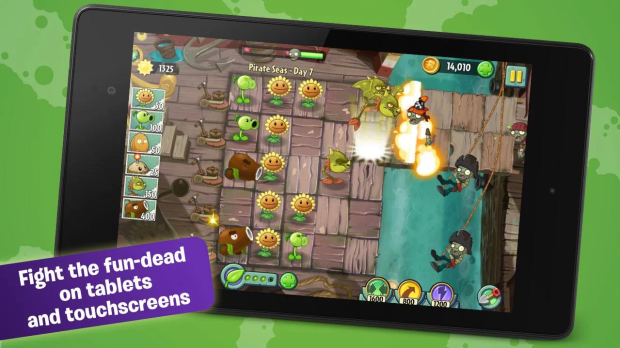 This is the first time that PopCap has made the Plants vs. Zombies games free, which follows in the footsteps of other popular games like the Real Racing series, which went free-to-play in Real Racing 3. These types of games seem to be growing in popularity, as developers and publishers have discovered that the free-to-play model can actually make more money than charging a one-time fee for a game, since free-to-play titles consist of a heap of in-app purchases.

Overall, the game’s gameplay mechanics remain relatively the same, with different lawns to progress through, and slinging plant objects at incoming zombies. The only major differences are that there are now new zombies and new plants to choose from, as well as new lawns to play through.

Plants vs. Zombies 2 is available on both iOS and Android, but we’re still waiting on a PC and Mac version to hit the ether. The game’s prequel actually hit PC first, with mobile versions arriving later on, but seeing as how times have changed since then, it looks like PopCap is waiting to release PC and Mac versions, but we should see them arrive at some point in the future.