Research in Motion and Porsche Design have now made the Porsche Design P’9981 smartphone from BlackBerry now official. The P’9981 is essentially the BlackBerry Bold 9900 series with a different external shell to highlight Porsche Design’s minimalist industrial design. This will be RIM’s first collaboration with a luxury brand to release a smartphone and RIM now joins other collaborations on the market today, including Samsung with Armani, LG with Prada, Asus with Ferrari, and Acer with Lamborghini. 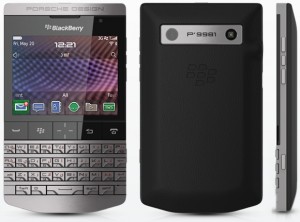 The Porsche Design P’9981 was previously known by its code name, the BlackBerry Knight, and the device replaces RIM’s BlackBerry Bold 9900’s soft and subtle curves with more straight lines and angles.

Dr. Juergen Gessler, CEO of Porsche Design Group, says, “Since 1972 Porsche Design has presented milestone products with iconic style, and the P’9981 smartphone from BlackBerry will be our next landmark. The pure and distinctive design, coupled with authentic materials and an emphasis on the manufacturing process, perfectly match our philosophy and complement the Porsche Design product assortment.”

BlackBerry users may be used to a PIN, which is a unique identifier number for each smartphone and can be shared for functions such as BlackBerry Messenger. Now, with the P’9981, each device will have a special premium PIN so you can spot out another member of the rich and famous club in a crowd.

The smartphone will launch in Porsche Design stores later this year. Pricing information is not yet announced, but the device is anticipated to cost over $2,000.