It looks like HTC’s alteration of how multitasking appears and works on HTC Sense 4.0 on its flagship HTC One X is causing some power users to be upset. According to HTC, multitasking and memory management were tweaked from Google’s original Android 4.0 Ice Cream Sandwich source code to provide an optimal user experience on Sense 4.0, and the company says that multitasking on the One X is operating normally as it should. What defines normal is subject to interpretation, but clearly for advanced users normal isn’t up to par. 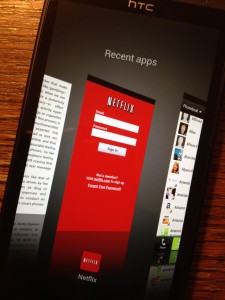 Multitasking under Sense 4.0 is changed in two ways from the vanilla build of Android 4.0 found on Google’s Samsung Galaxy Nexus. First, rather than a vertical list of apps that users can swipe to multitask, Sense 4.0 shows the multitasking in a horizontal carousel. To close an app, users would swipe the app pane up or down.

Second, according to users on XDA-Developers, it appears that HTC is being over-aggressive on background task management and is frequently closing apps in the background. For average consumers running a few apps at a time, this isn’t a big deal, and according to The Verge, this is lending to great battery life on the quad-core-powered international edition of the One X. However, power users are a bit miffed as that means that they can’t run as many apps simultaneously and it’s unclear which apps Sense decides to close first.

In response to The Verge, HTC writes:

HTC is aware of some questions in the enthusiast community about how the HTC One X handles multitasking and memory management for background apps. We value the community’s input and are always looking for ways to enhance customers’ experience with our devices. That said, right now multitasking is operating normally according to our custom memory management specifications which balance core ICS features with a consistent HTC Sense experience.

Memory management issue has been a concern on a number of HTC devices in the past as Sense does take a lot of resources. On the HTC EVO 4G, the HTC Desire, and to a small extent the HTC EVO 3D, I’ve noticed pop-ups in normal use saying that I was out of memory.

Given that Sense 4.0 eschews a lot of the typical pre-loaded HTC apps and widgets for a cleaner build, memory shouldn’t be as big of an issue as before. Hopefully, as HTC continues to optimize Sense, it can make a system that will appeal to the average consumers with Sense’s welcoming widgets and also to power users who want a little more out of their devices.

I haven’t really noticed the background app management on the EVO 4G LTE for Sprint, but I don’t run too many apps simultaneously in the background and I’d rather have longer battery life as a result of a non-user-replaceable battery on the device than the ability to load up on apps.