Everybody wants to stream media to your tablet, including PowerDVD with their new PowerDVD Mobile software.

The Honeycomb tablet app finds your video, music and photos served up by the company’s most expensive media playing PC software and then streams them over your home or office Wi-Fi network to your Android tablet running their app. The app does not stream remotely, so you’ll need to be on the same network.

The app streams media from a PC. It also streams between tablets, if both tablets have the app. If you have a DLNA TV you can stream to it as well. The camera on  your Android tablet can be used to take pictures or video from within the app and they will be sent to the media library of the tablet.

You can then stream those to other devices or upload them to YouTube and Facebook. You can also transfer files between the various devices that the package streams between. 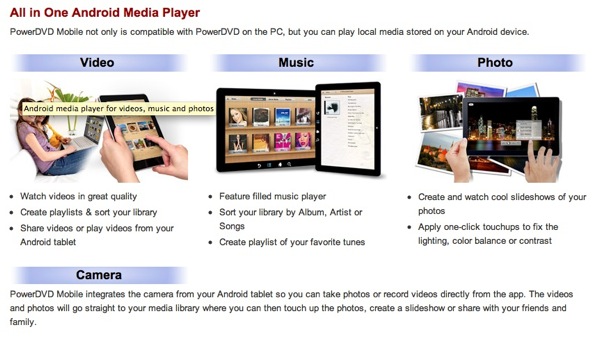 To make it all work, you need PowerDVD Ultra 11 installed on a PC. There are three versions depending on the capabilities you require, so make sure you get the most expensive Ultra pack which costs $99.95 usually, but is on sale for $77.95 and includes PowerDVD Mobile, a $19.99 app in the Android Market. The two cheaper options don’t include the app and won’t work with it. 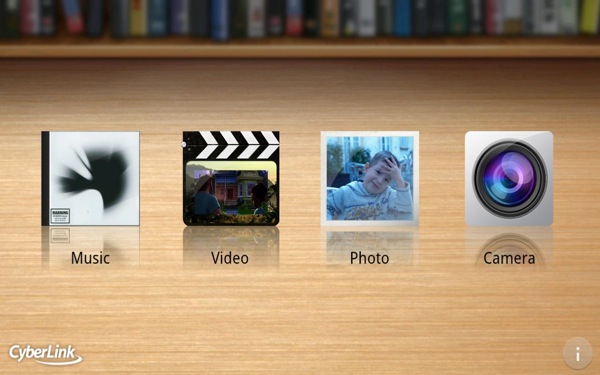 You will also have to have both the PC and the Tablet on the same Wi-Fi network. This doesn’t work through the Internet, which makes this option less desirable unless you already plan to get the PC software, which plays DVDs, most popular video files and plays Blu-ray movies. It does not work on a Mac.

If you don’t need the software and want to stream content from your home computer a pair of much more sensible options would be either Pogoplug Mobile when it comes out in a couple of weeks or for cloud backup and sync that also streams get SugarSync.