I just saw a video demonstrating a new object tracking algorithm developed as part of a Ph.D project. Zdenek Kalal is a Czech student at the University of Surrey in the United Kingdom. He demonstrated his amazingly accurate system which can track almost anything a camera sees once it is selected. It does some pretty amazing things. In the video he demonstrates it by selecting his finger as it is filmed by the camera. The selection tracks his hands and follows it almost perfectly. What makes it amazing is that it learns from the movement and the tracking improves. One could train it over a short period of time to track your fingers, face or a car racing down a highway. With something like this we could have truly “Minority Report” style human-computer interface. As amazing as the Kinect was for Microsoft Xbox, this system looks even better.

Kalal has a series of 12 videos that show what his algorithm can do. With a good webcam and this algorithm built into an operating system, a computer, tablet or phone could be controlled with razor fine accuracy using nothing more than a dot on your forehead, your finger tip, or just your eyes as you move your head. A camera outside your house could inform you when someone you know is stopping buy and warn you when a visitor is a stranger. People without the use of their hands could easily interface with a PC. The applications are enormous. 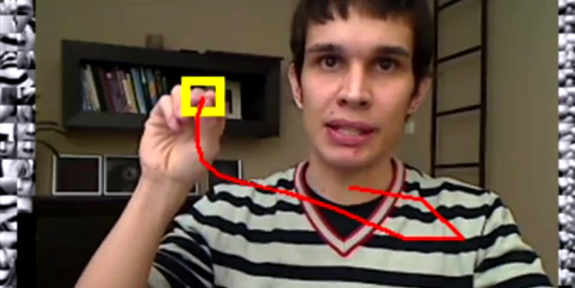 The code for the project is freely available at the Surrey University website. Kalal was recognized by a “Technology Everywhere” award.