Keeping on top of your growing to do list is enough of a task, and keeping track of the many to do items you need completed on other people’s to do lists is almost impossible.

Enter Producteev, a group to do list solution that has been around for some time, but is announcing a new collection of apps today that make it easier than ever to manage to do lists and team members from your iPhone or Android device.

The new Producteev apps have been redesigned to make it possible to perform all the Producteev functions from your phone. This way you don’t need to do something halfway on the go and then finish it on your computer. 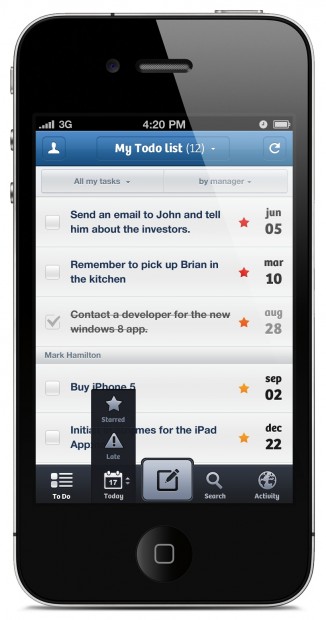 Producteev is about more than these new apps, it’s about social to do lists. No, I’m not talking about sharing your to do lists on Twitter. Don’t do that. Producteev makes it incredibly easy to invite others into your tasks and subtasks, so that you can delegate specific needs to employees or contractors you use. This process is as simple as using the @ symbol on a task or in conversation to get feedback from other team members. Even better, you can actually add the task to the user’s to do list, so they don’t have to.

Producteev also offers the ability to sync up with Google Calendar and Google Tasks. If you need more reminders, you can set the service to remind you over chat and many other services. Personally I’ll stick with app notifications, but a multitude of options are available.

You can’t use Siri to create a task, but you will appreciate the ability to add a task with natural language. Instead of tons of check boxes and menus, you can type something like, “@Adam Write why you still use the iPhone 3GS next Monday.” and Producteev knows what you mean.

The new apps for Android, iPhone and Windows 7, join the Producteev Mac app, and allow you to work on multiple workspaces, manage team members, view to do lists and subtasks as well as offer offline access.

One of the cool integrated features I saw while getting a demo of the service was the ability to farm out a task to Task Rabbit, right form inside the app. Task Rabbit is a service in larger cities that finds a runner to complete your task for you, for a specific price, like picking up brochures from a printer. This integration was inside the new web-version of the app. You can see a demo of the Producteev web-version below.

There are two major reasons I am excited about Producteev again. First is the ability to reach the to do lists on any device, but that’s not unique. However, the ability to assign tasks to team members and have the task show up right on their lists and eventually on their notifications, is cool.

We aren’t using Producteev to handle tasks internally, but this new release has tempted me to give it a closer look as we try to streamline and avoid email.

Producteev offers a free version for 2 users, and business pricing starting at $10 a month.