Project Fi is Google’s own wireless service similar to Verizon or T-Mobile, only it’s extremely different in multiple ways. With the release of the Nexus 6P I’ve been testing Project Fi out over the past 30 days, and below are a few thoughts, some initial impressions, and everything potential users need to know.

I’ve been an AT&T customer for a long long time, and before that I was tied to Verizon Wireless paying way too much while always having to watch my data usage. With Project Fi, Google looks to change how we view carriers, how our phones use data, and push the industry forward.

With prices continuing to go up, data being used more and more by HD video and streaming live TV, I’ve decided to test some of the other options available. I currently have a 15GB family plan on AT&T, shared between three lines, and we never go over our data limit. Mainly because I always have WiFi. As a result of the way Project Fi works, it’s perfect for my situation, and perfect for millions of other customers as well. Read on for more details. 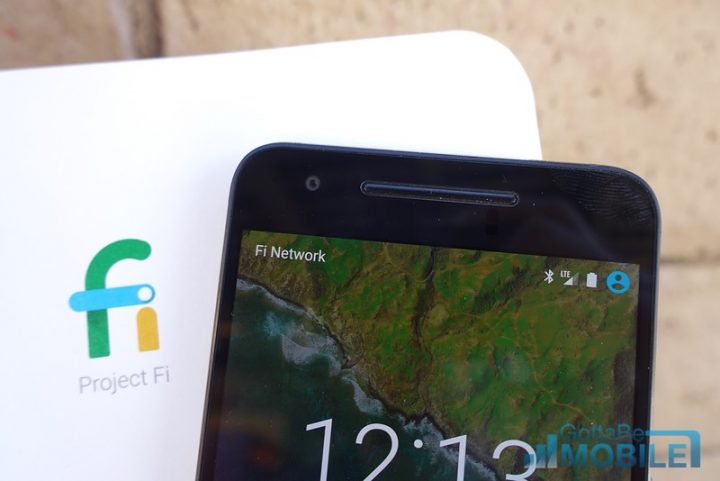 For those that don’t know, Project Fi uses both T-Mobile and Sprint, as well as Wireless Internet (WiFi) at home, or while out and about in the city using safe and secure public WiFi. Like at hotels, Starbucks, nearby businesses and more. Automatically switching between the best connection at any given moment to deliver the best experience possible for calls, texts, emails, browsing the web, watching video and more. Whether that be on WiFi, or on one of the two carriers. It’s a unique approach, but one that could be the future.

The first day was a breeze. Setting up Project Fi is as easy as downloading the app, tossing in a SIM, selecting how much data you’d like, adding a payment method and hitting activate. I chose not to transfer my Google Voice number, and it populated one for me. It took less than five minutes, right from my couch. The Project Fi app is extremely easy, simple to understand, and user friendly. Everything from setting it up, adding an extra GB of data, to checking usage and more. 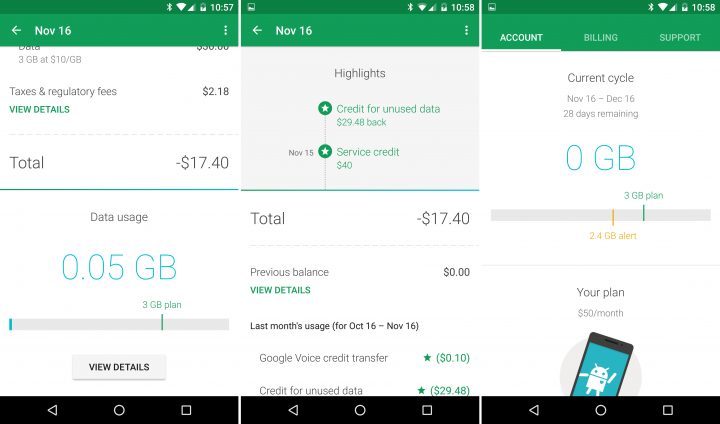 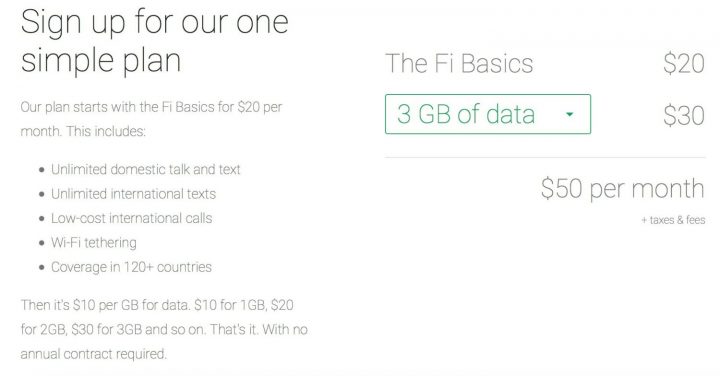 I typically use around 4-6GB of data a month, so to see how well I’d do with a limit I chose 3GB of data with Project Fi, which comes to $50 a month. Unlimited calls, texts, and 3GB of data. This is far less than I pay on AT&T, but also less data, which was a concern. Spoiler, I didn’t even need 2GB.

The only complaint with the extremely fast and simple setup is the lack of choices for a number. Users can port over Google Voice, transfer an existing number from a carrier (which I didn’t do) or let Fi give you a new number. There wasn’t a list to choose from, which is what I wanted, so I was stuck with a randomly generated number. That’s my only complaint to an otherwise seamless experience.

Above is my first months bill in October during the launch of the Nexus 6P. I used .5GB in just over 20 days. I didn’t use the Nexus 6P every single day, but most days. I updated apps at home on WiFi as I always do, streamed Sling TV, played games and more. I used less than 1GB of data in 20 days. With AT&T I would have used nearly 3-5GB looking at my past usage.

It was a light month for me, lighter than usual, but still very shocking. My bill was essentially $25 for the entire month, and I streamed NFL Football, WatchESPN, Sling TV, played games, updated apps and more. Amazing. This is because I was always home on WiFi, at a friends with a wireless network, or on local wireless internet connections. I was blown away. I expected to go over my 3GB cap in two weeks, (even set a notification at 2.4GB) and instead, I received a refund at the end of the month.  Don’t mind the $40 credit, this was given to me by Google to test the service free for a month.

Sitting at home Project Fi will use WiFi for everything, and it used hardly any of my data. The minute users leave the house it switches to the nearest best connection, whether that be 4G LTE from T-Mobile or Sprint. Here in Las Vegas it was almost always on WiFi or T-Mobile, with Sprint being less than 25% of the time. As a result, I had 3-4 bars of solid 4G LTE or blazing fast internet almost everywhere. Calls were loud and clear, I didn’t have a single call drop, texts never failed, and the phone automatically switched seamlessly between networks, so users won’t ever have to do anything. Well, most of the time. 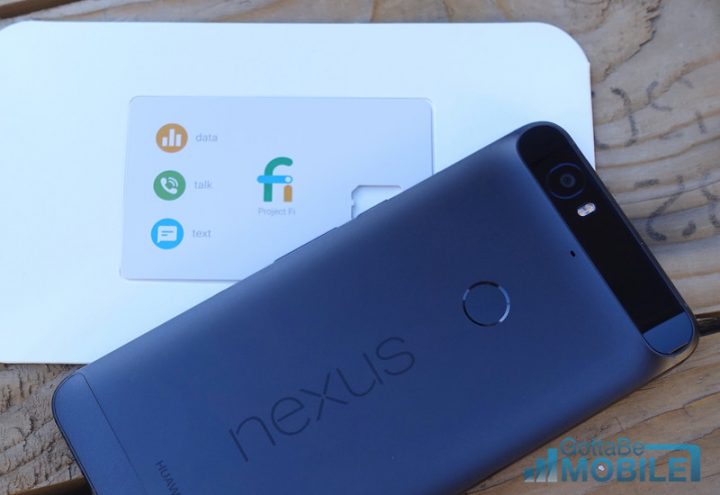 I did notice one day it got stuck on Sprint, and the connection was very slow while trying to load Facebook. A quick toggle of airplane mode actually found a nearby AT&T WiFi hotspot, which loaded Facebook instantly. So, while I had some Cold Stone ice cream I was able to stream some college football for free. Impressive. I went from a slow and terrible connection, to a free lightning fast connection allowing me to do even more than before.

It should switch automatically, and usually does, but that’s one issue that needs to be worked out. Fi can occasionally get stuck on a connection, as switching uses battery life, and Google’s trying to preserve as much battery as possible, while still offering the best connection. It’s a hard line to balance, because if the phone is always searching for a connection, the battery will drain extremely quick.

After a month with Project Fi one thing is very clear. I was on WiFi from a nearby business or at home far more often than an actual wireless network, and I was rarely using any of my 3GB data plan. I sent thousands of text messages, made tons of calls, and did everything I always do, yet spent under $30. 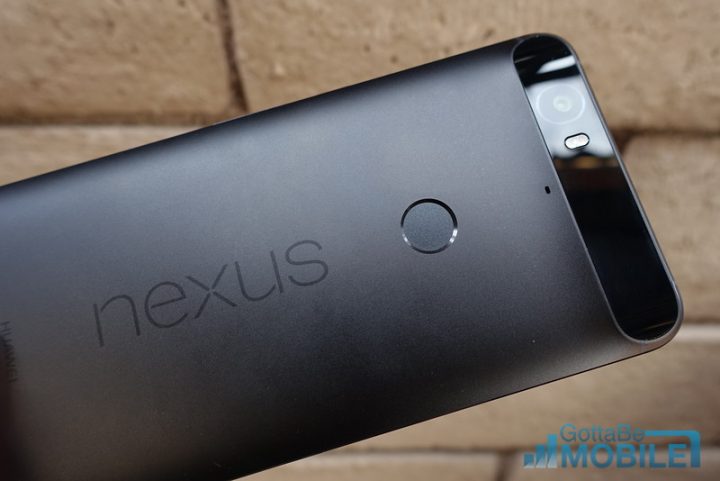 However, service isn’t always great. I traveled outside of my hometown of Las Vegas, and went to Utah. T-Mobile and Sprint just don’t deliver the same constant connection as AT&T, and my Note 5 had service in areas my Fi didn’t. While traveling I also didn’t have WiFi, and ended up using .5 GB of data in one weekend. Where as last month I only used that much after 20 days.

Then, last night while sitting at home my Nexus 6P thought I was on WiFi, but was actually on T-Mobile. Google Photos started automatically backing up images, and my Sling TV started using data. In one night I used another 1GB. I quickly toggled WiFi and it switched over, and I continued watching TV for free. However, if I didn’t notice the issue, Sling TV could have spent $10-$15 in one night. These are small issues that need to be worked out.

After a month with Project Fi I’m a bit torn. My first impressions were amazing, but recently I’ve been met with a few problems, things that could be costly if gone unnoticed. The peace of mind knowing I won’t go over my data limit is nice, but getting a refund and spending under $30 on my phone bill in October was amazing. It was truly shocking, and I was sold. At the same time, I’ve found myself thinking about data in my head. Do I want to stream WatchESPN and watch the BYU game while at the park walking the dog? If so, it could use 500MB of data, which is essentially $5 to enjoy the game for an hour. That’s silly, because I spend a lot more currently with AT&T, and I don’t get a refund at the end of the month. There’s no reason to think that way, but I did.

I’m at a cross-road for now, but the future of Project Fi is looking very, very bright. It has a lot to offer, the refund at the end of the month is an added bonus, and the ease of use is truly one-of-a-kind.

It’s clear that Google is using some pretty impressive technology that makes our phones use less data, which could benefit millions of potential users. Battery life didn’t seem to be impacted much, and overall it was a joyful experience. That said, it’s still a “Project” and will likely improve. For now I see tons of reasons to switch, but a few other reasons to stay with AT&T. If Google can continue to improve the Fi experience, fix some of these bugs or glitches I’ve noticed, I can absolutely see Fi being my carrier of choice for 2016.

I’ve decided to use Project Fi for another month, until mid-December, and see how things go. This month I’ve already used 1.5GB of data, but now that I’m back at home and in Vegas I expect data usage to drop to a stand-still, like it was in October. Google needs to fix these few problems, maybe introduce some family plans, and I’ll be sold. It’s already looking like an excellent option for me, and could be a great alternative for you. It only works with a few of Google’s Nexus phones, but more will hopefully be added next year. Maybe even the Galaxy S7. I can’t completely recommend it yet until I try it longer, but 2016 could be the year for Project Fi, and the year I ditch AT&T for Google’s wireless network.