While your wallet may be drawn to the number of inexpensive, non-official chargers, many of which come from China, you should think twice before buying one. We had reported earlier that a young Chinese flight attendant suffered death by iPhone electrocution, and now there is a second electrocution report where a Chinese man is currently in a coma due to iPhone shock.

In the first case, we do know that the young woman had been using her iPhone while the device was plugged in. Relatives say that the iPhone 5 that she had purchased through official channels, and the device is well within its one-year manufacturer warranty from Apple.

Now, ZDNet is reporting that a smartphone expert is speculating that a faulty non-Apple, third-party charger may be to blame. Third-party chargers may not have the same strict quality controls and may cut corners to keep costs low, which could have resulted in a busted circuit that led to the woman being electrocuted: 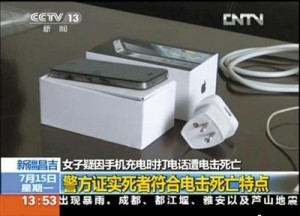 “Cottage charger may cut corners, the quality of the capacitor, the protection circuit is not good, leading to the breakdown of a capacitor charger, 220V AC directly into the cell phone battery inside.”

In a separate case, a man has been hospitalized in Beijing after he was shocked. He remains in a coma after over ten days now.

Though both cases affect Apple’s smartphones, poorly built wall chargers, third-party batteries, and charging cables could affect any number of smartphones, including popular Android devices. For its part, Apple had been trying to regulate the after-market charging industry with authentication chips when it introduced the iPhone 5 and the Lightning cable.

We’ve seen burning, exploding, and even scorching hot smartphone devices when those units weren’t used with official chargers or batteries. An HTC smartphone had left burn marks on one victim, but it was later discovered that the user had used a third-party battery.

So while it may sound tempting to get a cheap charger, you should opt for the official option that may cost a bit more but in the end will keep you safe.