In 2016 our smartphones and tablets will charge faster than ever before. So fast in fact, that having a smaller battery in the latest Galaxy S7 or LG G5 won’t even be an issue anymore. It’s called Quick Charge technology, and today Qualcomm announced Quick Charge 3.0 which promises to recharge phones to 80% in just 35 minutes.

These days smartphones are getting bigger, faster and loaded with higher resolution displays. Everything is improving while battery life and sizes remain the same. However, the biggest news over the past year is Quick Charging, also known as Adaptive Fast Charging by Samsung, or Turbo Charging by Motorola, but it all stems from the same technology made by Qualcomm.

This may sound confusing to the average smartphone and tablet owner, and if so, you’ll want to read on for everything you need to know, in simple terms, about Qualcomm Quick Charge 3.0 technology. And why you’ll want it in your smartphone next year. 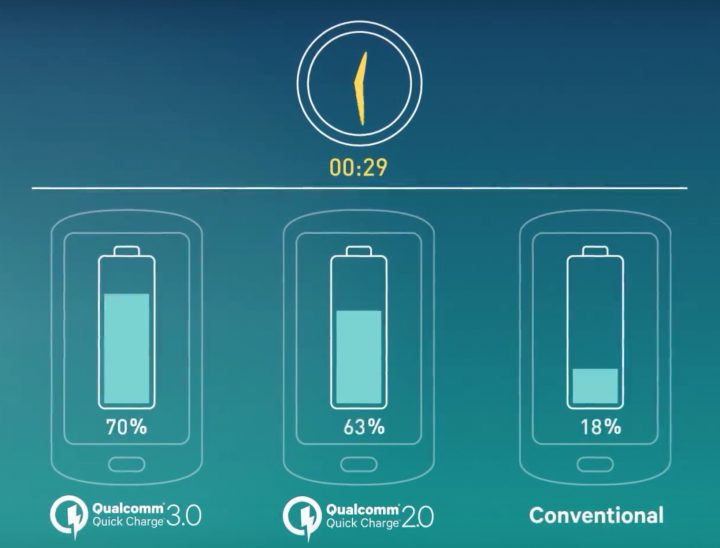 Quick Charge 1.0 was introduced in 2013 by Qualcomm, the company that makes the processor that powers most of the popular smartphones and tablets on the market today. It was the first real advancement in battery tech for smartphones. We’ve all read stories about battery technology that will change the world, but none have arrived or are remotely close to becoming a reality on a day to day basis.

The new Galaxy Note 5, and most smartphones released in 2015, have Quick Charge 2.0 type technology that allow them to recharge 60% faster than smartphones from just a few years ago, like the Galaxy S3 or LG G2. Rather than try to explain it all, the video below will give you a good idea of what to expect from smartphones next year.

Essentially Quick Charging will recharge a battery from 0-80% at an extremely fast rate, taking only about 35 minutes, then slowly go back to regular charging speeds in order to preserve the life of the battery. Quick Charge 3.0 will charge phones and tablets even faster, to higher levels, all while being more efficient. They’ve integrated a system that lets the device request the optimal amount of power to come from a wall, car, battery packs and other charging devices, to deliver the best and fastest charge possible at any given time.

The Samsung Galaxy Note 5 has QC2.0 and goes from 0-50% in about 30 minutes, and will be fully charged to 100% in 90 minutes. This is extremely fast, and much better than the three hours it took to recharge the Galaxy Note 2 or Galaxy Note 3.

In 2016, with select Qualcomm processors, smartphones and tablets will recharge from 0-80% in just 35 minutes, and likely charge to 100% in well under one hour. This is nearly 65% faster than traditional chargers, and Qualcomm states the 3.0 tech does this at a rate that is 38% more efficient than before. This means there’s less power loss from the charger and cord, to your device, allowing for a fast, stable, and safe charging rate that is quicker than anything we’ve ever seen.

So what does this mean for consumers? It means that as long as they buy a device with some of Qualcomm’s latest processors (which most phones use) they’ll have phones that charge faster than any other device on the planet. The Galaxy Note 5 charges faster than any phone I’ve ever owned, but devices next year will be even quicker.

Owners will be able to use a device for an entire busy day at work, then recharge to 100% full after just 15-20 minutes in the car on the way home. This is fast enough that a phone will be fully charged before most people are done getting ready in the morning. Giving users more time to enjoy their devices, and less time waiting for a recharge, or worrying about a dead battery.

Quick Charge technology is our favorite feature in smartphones and tablets over the past year, and in 2016 it will be better and faster. Battery life complaints will finally be a thing of the past.