“Real artists ship” is one pearl of wisdom left by Steve Jobs that Apple seems to have taken to heart lately, and it’s one that everyone else really needs to apply.

OS X on the fast track, Windows in the slow lane

The big tech news of the week is announcement of OS X Mountain Lion, the newest version of Apple’s desktop operating system, now available for developer preview. The update brings with it two elements from iOS: more iOS-like features and an annual update cycle. The former is getting the most attention, deservedly so given how strongly the iPhone and iPad are fueling the Apple ecosystem, but tightening up that update cycle is the real game-changer.

People have been questioning whether iOS is going to leave OS X in the dust, but instead it’s helping to bring OS X up to speed. With Mountain Lion, Apple’s message is clear: what you do on your iPad you can also do on Mac. By keeping their OS updates on an annual cycle, Apple can now bring iOS improvements and additions, such as iCloud and Game Center, over to OS X within a year. iOS is the tide raising all of Apple’s boats.

Obviously the only company this should concern is Microsoft, the dominant desktop OS player. While we were comparing the Windows 8 preview against OS X Lion, Apple already had another update in the works. We’ll still be waiting for Windows 8 to be released when people are installing OS X Mountain Lion on their Macs. The next version of OS X will be deployed shortly thereafter, loaded with whatever new tricks they’ve gleaned from iOS. Windows 8 is a daring step forward for Microsoft (aside from the logo), but that one big step is at serious risk of being outpaced by a lot of little ones. The pressure is on like Donkey Kong for Win 8 to deliver. 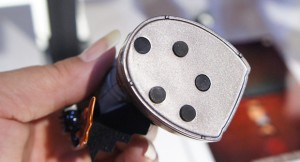 In less major but still relevant news, a bunch of new interactive toys for the iPad were unveiled at Toy Fair this week. Hasbro has systems to incorporate iPads into their zAPPed board games, making them more interactive and less “bored”. That’s somewhat cool, but what’s really interesting is how Mattel is making game pieces that interact with the iPad, recognized by distinct patterns of dots on the bottom of the pieces.

Sound familiar? It’s similar to the object-recognition system on Microsoft Surface. The key difference is Surface uses IR camera to “see” the dots, while Mattel’s Apptivity system uses special dots that can be recognized by the multi-touch system. Oh, and people actually own iPads while Microsoft Surface is still out of reach for nearly everyone. After four years.

Yes, Microsoft Surface still offers superior functionality for this type of interaction – bigger, more powerful, ability to recognize more objects simultaneously – but it doesn’t do anyone any good if no one has access to it. If Apple does get into the big screen business, it puts them one step closer to outclassing Microsoft in surface computing. As with tablets, Microsoft has horribly squandered their lead here.

Oh, but Microsoft isn’t the only one with trouble shipping. Google isn’t looking so hot on this either. While people cheer Android 4.0 Ice Cream Sandwich as a serious competitor to iOS (and I agree, it looks really good), it still suffers from the stilted release pattern of previous versions. Google previewed it in May of last year and released it in October. Four months later, its barely moved beyond its launch device, the Galaxy Nexus, with maybe a couple million units shipped. That’s a long time for a product on an annual update cycle.

iOS 5.0 was previewed in June, released in October, and is now on more than 100 million iDevices. How do we know that? Because iCloud has more than 100 million users and iCloud is unique to iOS 5 (at least until OS X Mountain Lion is official). A lot of those devices running iOS 5 are new, part of the more than 50 million iPhones and iPads sold last quarter (with another 50 due this quarter). The rest are on existing devices updated to the new OS.

Don’t expect this gap to be closed any time soon. News of which phones will get ICS is trickling out with no solid dates set. New handsets are still being released that run 2.3. Literally we got news of a phone getting updated to Android 2.2 this week. By contrast, every iPhone sold (not launched) in the past 20 months can update to iOS 5. This unevenness of deployment is staggering. I don’t know how anyone can look at that and not see a problem.

Again, none of this about what product is “better” or which technology is superior. Windows 8, Microsoft Surface, and Android 4.0 each has advantages, some tremendous, over their Apple counterparts. But producing this great work is only half of the equation. The more important half is getting them to users in a timely fashion. That, more than features or functionality, is the problem Microsoft and Google need to solve. If they can’t compete with Apple on deployment, getting their products to users, they’re not really competing.