Just ahead of its expected reveal next week, pictures of a hot-red Motorola Droid Ultra leaked.

The singular picture of the device, which famed industry insider EVLeaks posted to TheUnlockr , depicts a device that’s almost identical to the black version that Verizon is expected to show off at an event in New York City next week.

Instead of painting the device with a high gloss simple red finish, the red Droid Ultra will inherit the cross hatched pattern that is also expected to appear on black versions of the Droid Mini, Droid MAXX and the Droid Ultra. This pattern is due to the device’s back being made of Kevlar – the same material that used in bulletproof vests. 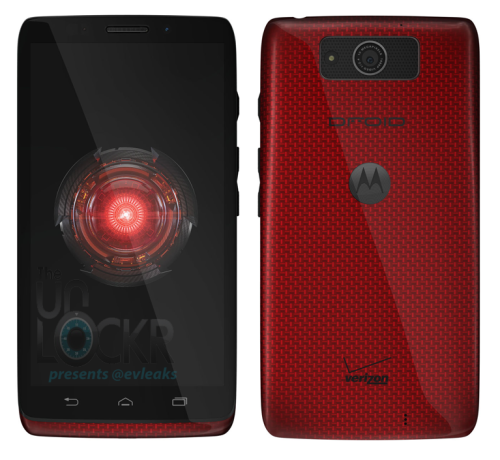 Read: Verizon Read to Show Off New Devices, Just Not the HTC One

Recent leaks have pegged the Droid Ultra as having a large display and a quad-core Snapdragon processor for starting and running apps quickly. These leaks also indicate that Motorola is preparing to finally put up a good fight in the camera space with a rear-facing camera that’s has a sensor that as high as 10 megapixels.

As Verizon is heavily into pushing its smartphone users towards its latest wireless technologies, that the Droid Ultra will support the carrier’s 4G LTE data technology is almost a given. So far, the pricing of the Droid Ultra in any color remains a mystery.

The Droid Ultra likely replaces the Droid RAZR HD in Verizon’s lineup. That device debuted as a Motorola flagship in the fall of 2012.