Red Pocket Mobile is a pre-paid wireless company that offers affordable connectivity to the iPhone and Android smartphones with no contracts for $40 to $55 a month.

AT&T compatible smartphones connect through Red Pocket Mobile to a large network with 3G and 4G speeds, depending on the device, offering coverage and speed on par with the same phone on AT&T. 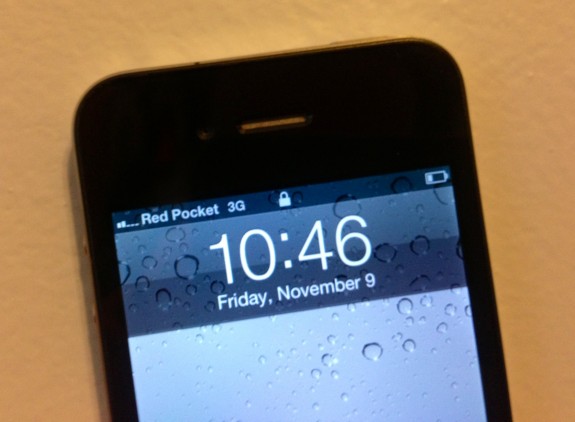 Over the past two months GottaBeMobile tested the red Pocket Mobile pre-paid service with an AT&T iPhone 4, using the bring your own smartphone plan.

The iPhone 4 used is not unlocked and Red Pocket now sells Micro SIM cards so there’s no need to cut a SIM down. Red Pocket Mobile works with locked AT&T phones or unlocked GSM phones with 850 mhz, but not with T-Mobile phones.

Here’s how red Pocket Mobile fared, check our Straight Talk Review to compare the plans and service. For help picking a phone, check out the Best Pre-paid Smartphones of 2012.

Red Pocket mobile offers a wide area of coverage, following AT&T’s footprint in the U.S. This means if AT&T is a good carrier choice for coverage, Red Pocket Mobile is as well.

While using Red Pocket Mobile, coverage was good with no dropped calls during tests in various cities in Ohio. Call quality was also good, with clear sounding audio on both ends of calls. Users can bring their own number, or get a new number.

Setting up the iPhone is easy enough, and does not require a jailbreak or an unlock. Red Pocket installs a profile to change settings automatically. Texting works fine, but picture messaging will not work without a jailbreak. Users can send iMessages with photos though.

Thanks to the roaming on AT&T’s large 4G HSPA+ network, Red Pocket Mobile users can expect download speeds around 4Mbps down, while in 4G coverage. This is not the faster LTE coverage found in the iPhone 5 and other phones, but it is faster than 3G, and more widely accessible than AT&T’s LTE network. 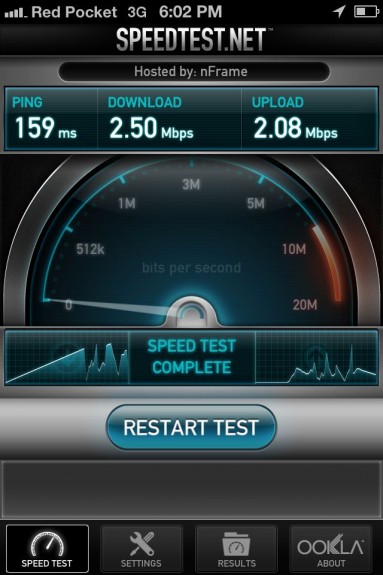 The iPhone 4 used to test Red Pocket Mobile is not compatible with 4G networks, but it did deliver fast 3G connectivity as shown in the photo above. A newer iPhone 4S and various Android phones can connect at faster speeds.

Red Pocket Mobile offers 1GB of data for $54.99 a month, with unlimited talk, text and MMS. This is more than Straight Talk charges for “unlimited” data, but Straight Talk tells users not to stream audio and clamps down on users that use over 200MB in a day or 2GB in a month.

There is no way to add a personal hotspot to a Red Pocket Mobile plan without using a third-party app or jailbreaking the iPhone. These methods may be out of line with Red Pocket Mobile’s terms of use. 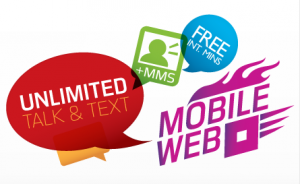 These plans offer a good value to users that can keep data usage in check by connecting to WiFi whenever possible. The data limits are tight, but compared to plans on other carriers the price remains a good deal.

All of these plans include subsidized phones, instead of a bring your own phone approach, so that is another factor to consider. But, for users that already have a phone, it’s a good deal.

Red Pocket Mobile delivers a good value in pre-paid wireless and the ability to bring an iPhone or AT&T or unlocked Android phone offers a lot of choice to smartphone owners looking for a lower monthly bill.

Users looking for a cheaper monthly cell phone bill, who are able to control data usage, should check out Red Pocket Mobile.