When it comes to the iPad the only things more ubiquitous than Twitter clients are keyboard covers or cases. I won’t say they are a dime a dozen because these keyboard case/covers  are a little more expensive than that, but there are certainly a number of varieties for you to choose from from makers like Logitech, Kensington, Zagg, Belkin, and others. With the launch of the new iPad there was quite a bit of consternation over whether or not these accessories designed for the iPad 2 would work with the slightly bulkier new iPad. In some instances that consternation proved a moot point for those who had made investments. Certainly, though, for those who had not yet picked up a keyboard case, all you needed to do was wait for versions targeted towards the new iPad. 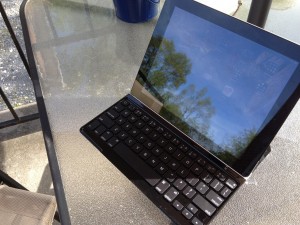 I spent some time with the new Logitech Ultrathin Keyboard Cover over the weekend. Do note that you can use this easily with either the new iPad or iPad 2. Let me state up front that though I’ve tried out a few keyboard cases in the past, I haven’t been a big fan. My reason is that I like to use my iPad as a slate mostly, and some of the models I’ve tried attach to the iPad in ways that make this more cumbersome than I like. I prefer a detachable keyboard cover. Now, that’s a personal preference, and as you can see from the reviews and roundups we’ve done here on GBM, just how much a personal preference that can be. But, hey, that’s the beauty of these personal devices called Tablets.

That said, with few exceptions, I very much like the Logitech Ultrathin Keyboard. It is indeed ultra thin. In fact, it is thinner than the new iPad. When attached to the iPad as a cover (using magnets in that Smart Cover like way), it doesn’t add a lot of bulk at all. The aluminum finish matches up nicely with the iPad’s back cover, and when closed up it gives you a look not unlike the Byrdge keyboard that everyone got so excited about last week.

The Logitech Ultrathin Keyboard Cover is built for folks like me who have don’t like a keyboard that is more permanently attached to the iPad. There is a magnetic strip that attaches to your iPad when you use the keyboard as a cover, again, using the Smart Cover method we’re all familiar with.  But when you want to use the keyboard as a keyboard, you detach the iPad, stick it into the white slot, and off you go. There are audible clicks to let you know when things are aligned properly and if you wish to remove the iPad from the keyboard, there is an audible click that happens when you grab the iPad and tilt it towards you. This lets you know when you can slide the iPad out of the slot.

So, to be clear, don’t think of this as a case where you can fold the keyboard over behind your iPad when you are using your Tablet as a slate. Think of this as a detachable cover and keyboard.

The keyboard connects via Bluetooth and comes with a micro-USB cable to charge up the keyboard separately. There is an on/off switch for the keyboard, although the keyboard will go into standby mode if it isn’t in use. Although the keys do not have a glossy finish, the areas surrounding the keyboard does an that can attract fingerprints, but we’re all used to that with Tablets by now.

One of the prickly issues with any keyboard case/cover is how well you can type on the keys. In order for the hybrid case/cover keyboard concept to work the keys need to be squeezed into the dimensions of the iPad horizontally, and for those who have large hands this can be an issue. To be honest, I wasn’t expecting a good experience with the Logitech Ultrathin Keyboard cover, but I was pleasantly surprised. I was able to type satisfactorily and without a long learning curve. If fact, I was up to speed pretty quickly and I’m typing this review on the keyboard right now.

There are some iPad-specific function keys that require you to hit the Fn key to access them, including copy, paste, volume,) and there is a dedicated Home key that takes you back to the iPad’s home screen. One nice Fn keyboard combination allows you to select one word to the left or right with a single key press. That comes in handy for doing some editing. 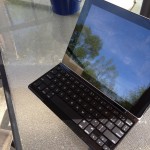 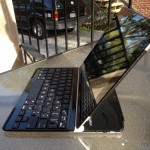 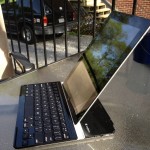 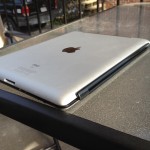 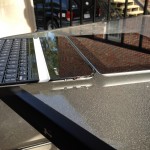 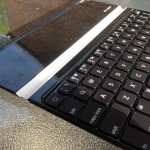 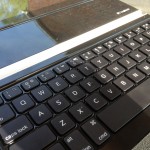 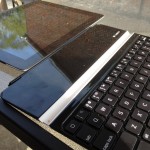