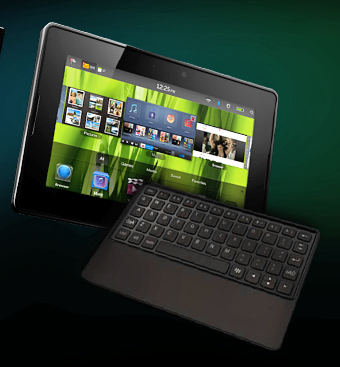 Research in Motion’s head of accessories Bruce Winter had hinted that a keyboard accessory may be coming in the next few months for the Canandian BlackBerry-maker’s first tablet foray with the BlackBerry PlayBook. The move would be the first time that RIM would be releasing a keyboard that’s not attached to one of its smartphones, known for having one of the best keyboard experiences in the mobile industry.

News of a BlackBerry PlayBook keyboard was reported by Pocket-lint in a talk with RIM’s Winter, who was unable to officially confirm the keyboard, but says that one could expect the accessory as the next logical step according to blog.

It’s unclear how the keyboard will look at this time. RIM, known for offering a comfortable and accurate typing experience given the constraints of small portables like its BlackBerry smartphones, has the option of either releasing a small, compact keyboard that’s netbook in size or a full sized keyboard like what Apple had done for the iPad.

In a rendering originally posted by IntoMobile based on the PlayBook training material, the keyboard shown appears to utilize a similar form factor to the ZaggMate keyboard for the iPad, in which the keyboard fits into the molded screen case covering the keybord can be used a protector case for the device’s display. IntoMobile had stated that the accessory would be coming this summer.

If the rendering is accurate, the keyboard appears to be smaller than a full-size keyboard.