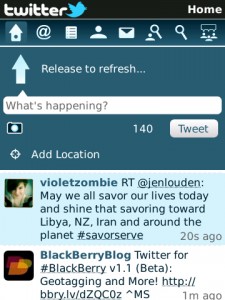 Push notifications are now being enabled on the RIM-developed Twitter app for the company’s BlackBerry smartphones. The beta, now in version 1.1, now brings a number of new features in addition to push notifications for direct messages and mentions, denoted with the @name usage.

Now, direct messages are now threaded in conversation view so you can follow the conversation easily when someone messages you privately on Twitter. Also, retweets now have their own retweet designation so you can tell them apart from a regular tweet sent by a contact.

Geotagging, auto-filled hashtags, and new gesture support for touch-enabled devices, like the BlackBerry Torch, round out the list of notable new features to the new beta.