We knew that the Samsung Galaxy S II LTE was going to be headed to Canadian carrier Rogers at some point and while we still don’t have a firm release date for the highly coveted device, the carrier is now offering up the phone for those that want to reserve their device. It’s not free though. You’re going to have to pony up a $40 refundable deposit if you wish to put your name down.

So, why might you want to throw a pre-order at this phone? Well, it’s the 4G LTE version of one of the best Android phones to ever grace the market. Rogers’ device is a 4.5-inch monster with a speedy processor, Android Gingerbread, a ton of RAM, and a growing LTE network behind it. It’s a recipe for success. 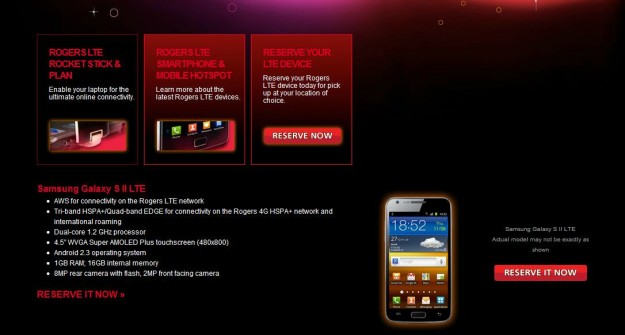 Here is the spec rundown:

So, if you live in Canada, or are moving there to pick one of these up, you can find it up for reservation right here. Again, no release date, but it should be out before the end of the fall season.