The latest report suggests that Apple may be moving the launch date for its next-generation iPhone launch back to June after having launched the iPhone 4S in the fall. Additionally, the company’s latest flagship smartphone is described to have a Liquidmetal case, giving it strength while retaining a thin and light form factor. In the past, Apple had relied on Liquidmetal Technologies to deliver the micro SIM ejector tool for the the company’s iPad and iPhone models. The SIM ejector tool is small and light, but is very strong, allowing Apple to deliver a tool that’s virtually non-bendable and unbreakable. 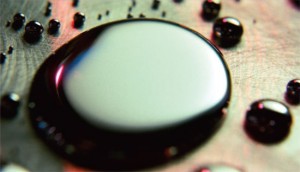 Migrating to a metal enclosure for the iPhone 5 or the next-generation iPhone succeeding the iPhone 4S would allow Apple to better compete against the unibody polycarbonate shell on the Nokia Lumia 800 and 900 as well as the HTC One X, the rumored ceramic finishing on the Galaxy S III Samsung flagship, and the ceramic-like micro-arc oxidation process used on the HTC One S. This would allow Apple to also migrate away from the rear Gorilla Glass plate on the iPhone 4 and iPhone 4S. Though the rear glass plate is elegant and well designed, users have found that the rear scratches too easily and may crack on impact if the iPhone is dropped. A Liquidmetal back cover should help to alleviate some fragility concerns.

According to 9to5 Mac:

According to industry sources, the next flagship phones of the companies are expected to adopt unprecedented materials for their main bodies, that is, ceramic for the Galaxy S3 and liquid metal for iPhone5, both being thin, light and highly resistant to external impacts. The new phase of the rivalry is because neither one of them can get a decisive edge over the other solely with its OS and AP specifications, features or design.

Additionally, moving to Liquidmetal would allow Apple to return to the iPhone’s metal case roots. The casing on the original iPhone launched in the summer of 2007 came with an aluminum shell. However, Apple migrated to a plastic unibody case with the iPhone 3G and 3GS because plastic is more friendly to wireless signals and reception. The company then moved the antenna to the stainless steel band on the iPhone 4 and iPhone 4S and chose a design with dual-glass plates. It’s unclear if Apple will retain the external antenna to help with wireless signal reception when it moves to a Liquidmetal body.

All of this information should be considered rumor and speculative at this time. In the past, we’ve heard of a unibody metal iPhone with a Fall launch date.